On Wall Street, the stock market saw strong 2-week performances. Dow Jones and S&P 500 futures climbed about 5.5% and 7.7% respectively. The former saw its best performance since early 2021 as the latter climbed the most since May 2020. Nasdaq 100 futures took the cake though, with the index gaining over 10%. You need to go back to the early 2000s dot-com bust to see the same kind of performance.

This comes despite an increasingly hawkish Federal Reserve, where Chair Jerome Powell and company offered relatively strong signals for financial markets. At the beginning of this past week, he said that the central bank ‘will hike’ by more than 25 basis points each time ‘if needed’. Simultaneously, the central bank has been offering confident messaging that they do not see elevated odds of a recession in 2023.

This tone could have been what helped propel stock markets higher. Also working to offer more liquidity into the system is a rising balance sheet. On the chart below, the S&P 500 can be seen rising in recent weeks as the Fed increased its asset holdings. In fact, earlier in March, the central bank increased its balance sheet by the most since early January.

All Eyes on PCE and NFPs

Is this the end of stock market pain for now? Some of the most aggressive market rallies can be found in a bear market. 2018 and 2020 offer recent examples. In 2018, when the Fed raised interest rates 4 times, the S&P 500 found a low early in the year before rallying 16 percent to a record high. Then, the index fell swiftly into a bear market to wrap up the year, dropping over 20%.

The central bank then reversed its policy in 2019, unwinding the series of aggressive rate hikes. This led to a strong year for the stock market. According to Bloomberg, US CPI is expected to rise 6.2% y/y this year, falling to 2.6% in 2023. It remains to be seen how far inflation could cool later this year. For the time being, monetary policy remains increasingly against the favor of risk appetite. This can be seen by looking at the S&P 500 risk premium over the 10-year Treasury yield on the chart below.

Ahead, all eyes are on US PCE and jobs data. The former is the Fed’s preferred inflationary gauge, and the core reading is expected to clock in at 5.5% y/y. Although this data would largely ignore the potential impact of Ukraine. March’s non-farm payrolls report will wrap up the week. Average hourly earnings are expected to rise 5.5% y/y from 5.1% prior. Further strong price signals may underscore the Fed’s hawkish rhetoric, risking stock market volatility. 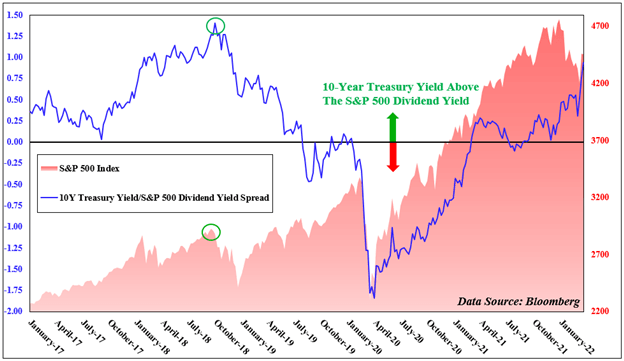