Consumers watched as prices at the pump hit all-time highs nationwide this month. As prices rose (USO), the House summoned oil executives to Washington, citing market manipulation and price gouging. The Senate moved on legislation to sue OPEC over anti-trust violations. However, in an interview Friday, Saudi Arabia’s energy minister said, “the bottleneck is now to do with refining.” Adding, “I did warn this was coming back in October. Many refineries in the world, especially in Europe and the US, have closed over the last few years.”

Before digging into the history of supply closures, a quick look at market prices would indicate the Minister’s comment holds merit. The Gulf Coast is one of the world’s largest oil refining and trading hubs. Millions of barrels of oil products are refined, imported, exported, stored and traded daily. Despite the fragmented and competitive market, the difference between the price of oil and the price of oil products like gasoline and diesel has risen dramatically: 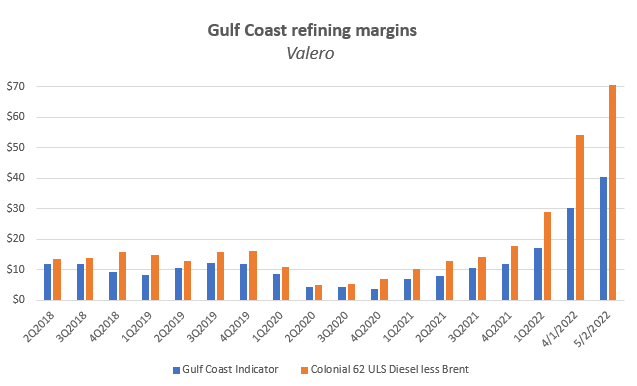 Putting the chart into context, a barrel of Brent oil (CO1:COM) trades for ~$110. A barrel of diesel in the Gulf Coast trades for $70 above the price of oil. Suggesting that almost half of the price at the pump comes from the refiner’s margin. A phenomenon that should draw the attention of consumers, investors and regulators.

For stakeholders attributing the extraordinary margins to price gouging and collusion, it’s noteworthy that Marathon (MPC) operates more US refining capacity than any other company. However, Marathon (MPC) accounts for ~3% of global market share. Furthermore, the refining margin phenomenon is not isolated to the US; blended margins in Singapore are also over $40 per barrel, as are margins in Rotterdam, Europe’s largest refining hub.

Naturally, nobody wants to bear responsibility for rising fuel prices. As a result, oil executives, refiners, politicians and energy ministers have all directed blame to other stakeholders. The outcome leaves consumers and investors guessing at the underlying cause for rising prices and profits. For investors, accurately diagnosing the root cause of the issue could shine light on future profitability and share price performance.

In November 2017 Shell (SHEL) adopted what are referred to as “lifecycle” or “scope 3” emissions targets. Targets that include not just the CO2 emissions produced by its operations, but emissions produced by its customers. During the company’s investor day in May 2021, CEO van Beurden noted that “altogether, we sell around three times more oil and gas products than the oil and gas we extract ourselves.” Largely referring to gasoline and diesel refined from oil extracted by other producers. Refining and selling more products than Shell (SHEL) extracts weighs heavily on the company’s scope 3 emissions. And in July 2021, during the Company’s Q2 earnings presentation, management disclosed plans to reduce Shell’s (SHEL) refining footprint from 54 refineries in 2004, to 8 refineries by Q2 2021, and 5 refineries by 2025.

But Shell (SHEL) is not alone. BP (BP) adopted scope 3 emissions targets, and shortly thereafter announced plans to reduce refining capacity by 20%. Total (TTE) too adopted scope 3 emissions targets before selling the company’s Lindsey refinery and converting the Le Mede refinery into a bio-fuel processing plant. According to the IEA, 1.7mb/d of refining capacity was closed between 2020 and 2021. Though divestiture plans from European majors also reduce the incentive for others to invest in building greenfield capacity, as those prospective investors can simply acquire existing assets.

Policy-driven closers and conversions are not unique to European energy companies. In the US, increased biofuel blending mandates led to a spike in the cost of RINs (compliance credits), leading several operators to convert refineries into bio-diesel processing plants. By producing biofuels themselves, operators avoid the cost of purchasing expensive credits. Philips (PSX) announced plans to convert its Rodeo refinery to a biofuel plant, reducing effective capacity by more than half. The announcement followed plans by Marathon (MPC) to convert the Martinez refinery, cutting effective capacity by more than 70%. Holly (DINO) converted Cheyenne, reducing capacity by almost 90%. CVR (CVI) did the same at Wynnewood.

With oil product demand expected to reach an all-time high in 2022, and supply reduced in the US and Europe, consumers are left scrambling for spare capacity elsewhere. Two refineries are planned to begin operations in the Middle East during 2022, bringing relief in the second half of the year. Exxon (XOM) is also building a new 250kb/d refinery in Texas. However, the vast majority of spare refining capacity globally sits in Russia and China. China announced plans to eliminate all oil product exports in March of 2022, while Russia has seen falling exports since war in Ukraine began.

Policy-driven closures in the west have been dramatic in recent years; though price impacts have been masked by reduced demand from pandemic-related restrictions. The steady divestment of capacity from European majors has reduced the incentive for investors to build new capacity. And though increased capacity in China can balance the market in a spreadsheet, it leaves consumers vulnerable to policy measures from Beijing. These dynamics lend credibility to Friday’s comments from the Saudi energy minister.

For energy investors, the economic shift could be significant. Much ink has been spilled over the impact of high oil prices on demand, and whether demand destruction could emerge if oil prices reach $150 or $200 per barrel. However, if “demand destruction” results from a bottleneck in refining capacity, the economics of a barrel of oil could shift rapidly. Rather than refiners capturing a $5-10 margin for processing a barrel of oil, they could begin to command more of the economics. With Valero (VLO) already capturing $70 a barrel for diesel in the Gulf, and much more for jet fuel, it appears the economic shift is already taking place.

Originally Posted on: https://seekingalpha.com/news/3838751-as-gasoline-prices-hit-record-highs-saudi-blames-refiners?source=feed_tag_commodities
By:

Bitcoin Aims at 20,000 After Risk-On Move Weighs on US Dollar

Bitcoin and Ether Kick Off Week in Positive Territory

AUD, NZD, CNH in Focus as APAC Markets Kick Off Fourth-Quarter Trading Ahead of RBA