AUD/USD pulls back from a fresh yearly high (0.8007) ahead of the Reserve Bank of Australia (RBA) interest rate decision on March 2, but more of the same from Governor Philip Lowe and Co. may spark a bullish reaction in the Australian Dollar as the central bank appears to be in no rush to alter the path for monetary policy

AUD/USD is likely to adhere to the RBA rate decision as Governor Lowe and Co. are expected to keep the official cash rate (OCR) at the record low of 0.10%, and the board appears to be on a preset course as the central bank plans to “purchase an additional $100 billion of bonds issued by the Australian Government and states and territories when the current bond purchase program is completed in mid April.”

It seems as though the RBA is reluctant to deploy more unconventional tools as the minutes from the February meeting insist that “the Bank’s policy actions to date had been working broadly as expected,” and the central bank may continue to rely on its balance sheet to achieve its policy targets amid “the fact that the cash rate was at its effective lower bound.” 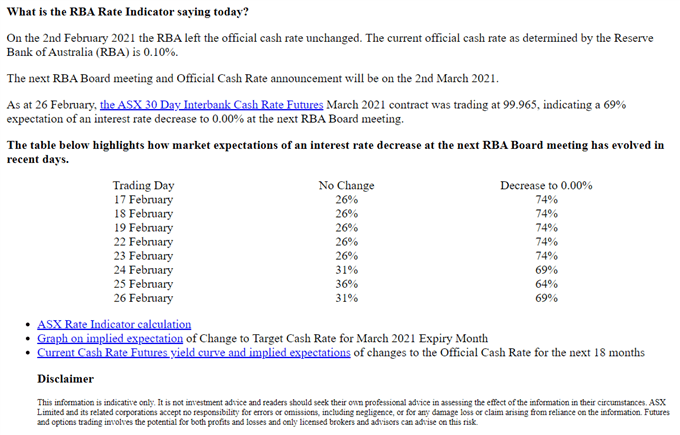 At the same time, the ASX 30 Day Interbank Cash Rate Futures indicates waning speculation for additional monetary support as the March 2021 contract now reflects a less than 70% chance for a RBA rate cut, and the wait-and-see approach for monetary policy may keep key market trends in place as Governor Lowe and Co. “continued to view a negative policy rate as extraordinarily unlikely.”

With that said, the RBA rate decision may spark a bullish reaction in AUD/USD as the central bank is expected to retain the current course for monetary policy, and the pullback from the February high (0.8007) may turn out to be an exhaustion in the broader trend rather than a change in behavior like the price action seen in 2020.