Asia-Pacific stocks look set for a mixed trading session to close out the week. A pullback in government bond yields bodes well for stock indexes, but disappointing tech earnings out of the United States may weigh on sentiment. Amazon stock fell more than 15% after the e-commerce giant’s third-quarter results disappointed estimates across various metrics.

The Bank of Japan is expected to keep its ultra-loose monetary policy in place at today’s policy announcement, expanding the policy divergence between the central bank and most of its peers. That may put pressure on the Yen. The currency has strengthened to around 146 against the Dollar since hitting a fresh multi-decade low last week. The BoJ may cut growth forecasts and increase its inflation outlook for this year and next.

A sharp drop in iron ore prices has Aussie Dollar bulls on the back foot. AUD/USD fell a little over 0.5% overnight but remains positive on the week. China’s steel exports fell around 20% in September from the previous month, according to Customs data. A protracted slowdown in China’s property sector has dwindled demand for the steel-making ingredient. That poses a big headwind to Australia’s economy, which relies heavily on iron ore exports. The RBA appears committed to moving forward with a reduced pace of rate hikes despite hotter-than-expected September inflation numbers. Cash rate futures are pricing a 25-bps rate hike at next week’s policy meeting.

Japan’s September unemployment rate and October Tokyo consumer price index (CPI) are due at 23:30 UTC. New Zealand’s consumer confidence held steady at 85.4 in October, according to ANZ-Roy Morgan data. Australia’s third-quarter producer price index (PPI), and Singapore bank lending for September will wrap up this week’s economic docket for the APAC region. The US PCE price index will likely dictate the market’s next big move. Analysts see the September core figure crossing the wires at 5.2% from a year ago, up from 4.9% in August.

AUD/USD is trading at trendline resistance as prices eye a second consecutive weekly gain. A break above the trendline would bode well for the price outlook, but the 50-day Simple Moving Average poses a near-term obstacle above that. MACD is increasing towards its midpoint, reflecting healthy price momentum. Alternatively, a reversal lower would threaten the 2022 low. 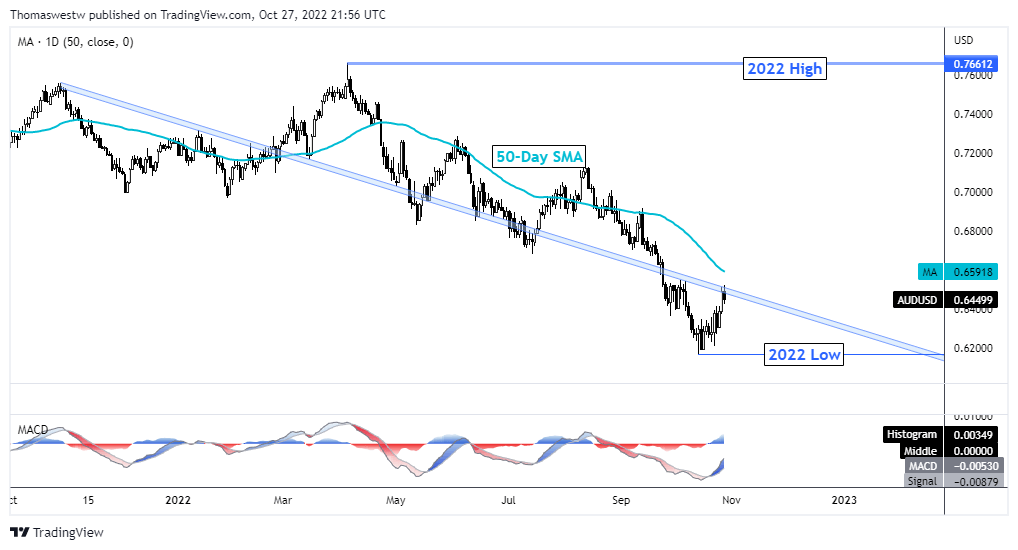