Bitcoin prices plunged this week with BTC/USD poised to close the week down more than 11.6% – marking the largest weekly / daily declines since mid-May. An outside-weekly reversal off the highs has tested and defended multi-month uptrend support and the focus remains on a break of this near-term range for guidance. These are the updated targets and invalidation levels that matter on the BTC/USD technical price charts. Review my latest Strategy Webinar for an in-depth breakdown of this Bitcoin setup and more.

Technical Outlook: In last month’s Bitcoin Price Outlook we noted that BTC/USD was probing uptrend resistance with a more significant threshold just higher, “at the 61.8% Fibonacci retracement of the yearly decline at 51030– look for a larger reaction there IF reached…” A topside breach into the start of September faltered just two-days later with a massive washout plunging nearly 19% off the highs. The panic sell-off prompted a critical test of major support with Bitcoin defending the broader multi-month uptrend. Is the correction complete? 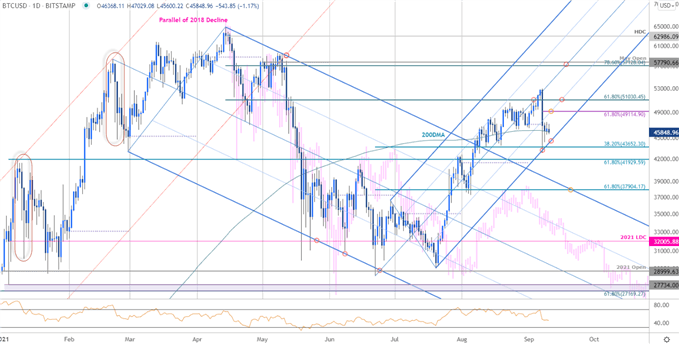 A quick update to the price parallel we’ve been tracking of the structure of the 2018 decline- while time -value has decoupled, the wave pattern remains similar. Another comparison to keep in mind is the extent of this correction off the highs – the last two instances of similar washouts can be seen at the January and February highs. Both scenarios ultimately marked a new intraday low (beyond the initial washout) before resumption and ended up being pullbacks within the broader uptrend- a similar scenario here? 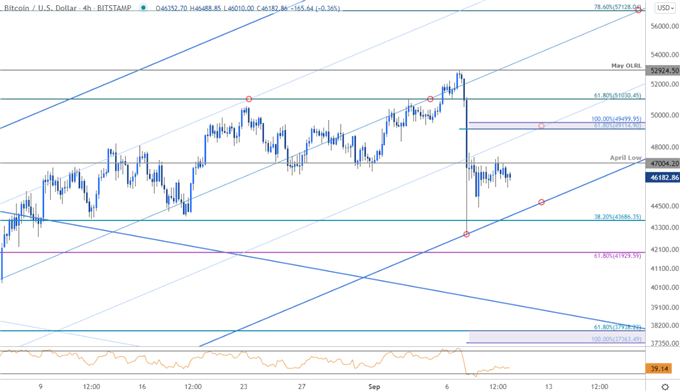 Notes: A closer look at Bitcoin price action shows the BTC/USD plunge turning sharply off the lower parallel before rallying back into the April low at 47004. Near-term bearish invalidation now stand at 49114/499 with a breach / close above 51030 once again needed to mark resumption towards the May opening-range low at 52924 and the 78.6% retracement at 57128.

Bottom line: The Bitcoin plunge turned off uptrend support and keeps price within the broader June uptrend. From at trading standpoint, the focus is on a breakout of this near-term consolidation just above slope support – be on the lookout for downside exhaustion ahead of the lower parallel (blue) IF price is going to hold trend with a breach above 49499 needed to clear the way for another test of the highs. Sentiment is stretched here so stay nimble and respect the closes- ultimately a break below 43686 could see another bout of accelerated losses. The bulls aren’t in the clear just yet. . .

For a complete breakdown of Michael’s trading strategy, review his Foundations of Technical Analysis series on Building a Trading Strategy