As the only major developed currency whose economy avoided a significant outbreak of COVID-19, the New Zealand Dollar has been at the forefront of speculation that the global economy is getting back on track. NZD/JPY hit fresh yearly highs for 2021 to end the week, while also breaking through to its highest level since 2018. Meanwhile, NZD/USD rates jumped to their 2021 high at 0.7315 before easing back.

There appear to be few obstacles in the way of further Kiwi strength. Otherwise, the upcoming Reserve Bank of New Zealand rate decision could prove to be a wrinkle. The RBNZ meets for the first time this year in the coming week, and policymakers seem highly likely to push off the discussion around negative interest rates. However, like the BOC and RBA, which have suggested that their currencies are appreciating for reasons beyond their control – mainly, the Federal Reserve – the RBNZ may too complain about FX markets. 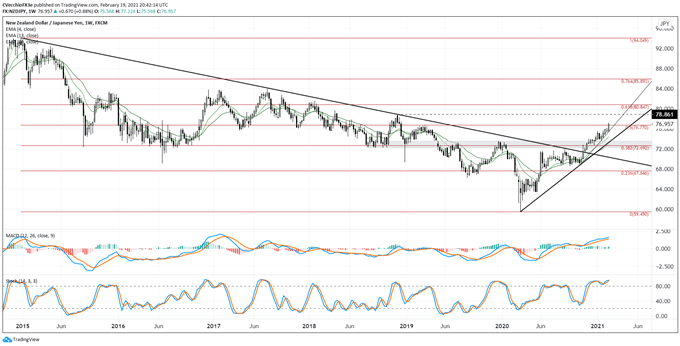 In our last New Zealand Dollar update, it was noted that “we’re looking at a long-term timeframe of ‘buying the dips’ in NZD/JPY rates through at least early-2021.” Overcoming its 2019 highs, NZD/JPY rates are on track with what is our longer-term bullish point of view: a bottoming process has commenced. NZD/JPY rates are running high following their break above the descending trendline from the January 2014, July 2017, December 2018, and August 2020 highs.

Momentum continues to strengthen on weekly timeframes. Having now overtaken the 50% Fibonacci retracement of the 2015 high/2020 low range at 76.77, NZD/JPY rates are above their weekly 4-, 13-, and 26-EMA envelope. Both weekly MACD and Slow Stochastics are at their highest levels since early-2017, offering further confirmation that we’ve seen a meaningful change in behavior in NZD/JPY rates on a longer-term basis. 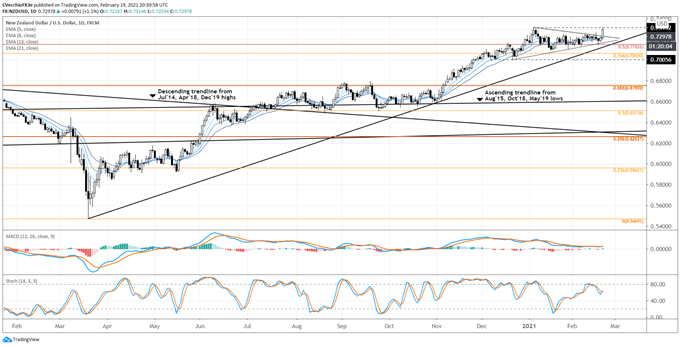 NZD/USD rates poked through to their yearly high today, reaching 0.7315 but going no further. Nevertheless, the symmetrical triangle consolidation that began in mid-December has given way to a bullish breakout attempt, which in context of the preceding move calls for a bullish continuation effort. Now that the base of the triangle has been reached at the yearly high, it may be the case that NZD/USD rates will begin their next leg up. 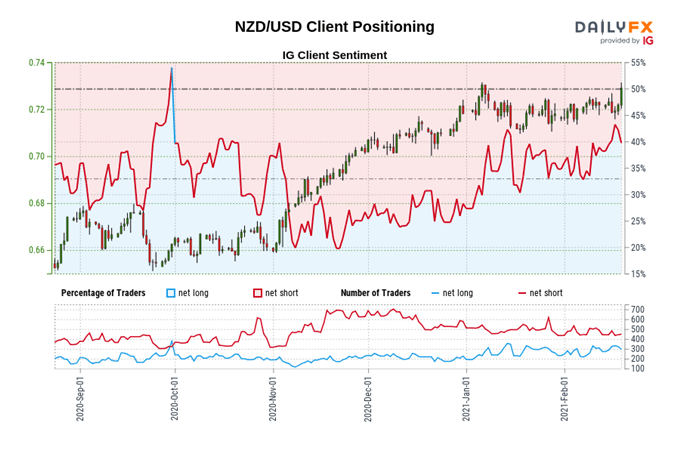 We typically take a contrarian view to crowd sentiment, and the fact traders are net-short suggests NZD/USD prices may continue to rise.

Traders are further net-short than yesterday and last week, and the combination of current sentiment and recent changes gives us a stronger NZD/USD-bullish contrarian trading bias.

Crude Oil Price Anchored Ahead of US CPI Despite Disruptions. Will Data Drive WTI?