The Australian Dollar has gained ground in the past week as the turmoil from the Russian invasion of Ukraine reverberates through markets.

While central banks and underlying fundamentals always have a role to play, the bigger picture could see capital flows dominate AUD.

Trade data out during the week came in better than expected at AUD 12.9 billion for the month of January and GDP was also a small beat. The annual number for 2021 showed 4.2% growth.

Federal Reserve Chair Jerome Powell confirmed during the week that they are all set for a 25 basis-point hike in rates at their March meeting. Although he did note that it was “too early to say if Russia changes the rate path.”

The RBA on the other hand has indicated that they will wait for first quarter CPI data before making a move on rates. They will get that data in late April, so it will be the May monetary policy meeting that has potential for a change in the official cash rate.

They left rates unchanged at 0.10% at their meeting on Tuesday.

Yield differentials at the short end favour USD, but the back-end favours AUD with the 10-year yield spread moving out to 36 basis-points.

The unfolding Ukraine war has hampered supplies of many commodities and hopes of a quick resolution to the conflict now appear unlikely. This has seen dramatic moves higher in the prices of energy, industrial metals, precious metals and soft commodities.

This is everything that Australia exports.

Russia accounts for around a measly 0.2% of Australian exports as they are largely a direct competitor and possess most of the same assets. With Russia being sanctioned, this may lead to higher demand for Australian commodity export volume.

Higher prices and higher volume of exports may not be the only tailwind for AUD.

On the equity side, this means that investors holding Russian companies have now had their investments valued at zero. There is currently no way of physically selling the stocks.

On the debt side, this means that bond fund managers will not be able to buy any Russian issuance and like their equity peers, may not be able to sell their existing bonds.

Global fund managers have mandates that stipulate what weight of their portfolio must be invested in each asset class. Now that Russian commodity investments are worth very little, if anything, the re-weighting could see demand for these type of assets in other parts of the world, ie Australia.

The obstacle for the AUD is clearly the risk environment that a war creates and commodity gyrations may calm down.

However, we have already seen that this war is not a typical risk-off event. Volatility would seem likely to continue and a significant sell off for AUD may happen, but the fundamental backdrop remains favourable for the Aussie. 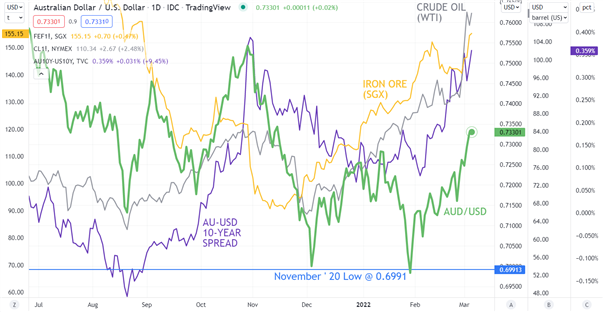