The Nasdaq 100, Dow Jones and S&P 500 bled lower last week despite upbeat economic readings in the form of retail sales and services data. Losses have seen the indices pull back from record levels, but volatility remains reasonable and symptoms of risk appetite simmer beneath the surface evidenced by corporations diving into Bitcoin headfirst. Breaking above $55,000 for the first time Friday, Bitcoin has benefited from a wave of corporate adoptions ranging from Tesla and Microstrategy to Mastercard and Morgan Stanley.

Get Your Free Equities Forecast

While equities cool off near record levels, corporate leaders have moved into the cryptocurrency market as they look to gain exposure – in one way or another – to the Bitcoin craze. Regarded as the future of finance by some and an unfounded bubble by others, Bitcoin’s price rise is undeniable and the explosive performance might be prolonged now that institutions are entering the space. Either way, it can be argued increased participation in the cryptocurrency space is indicative of risk appetite. 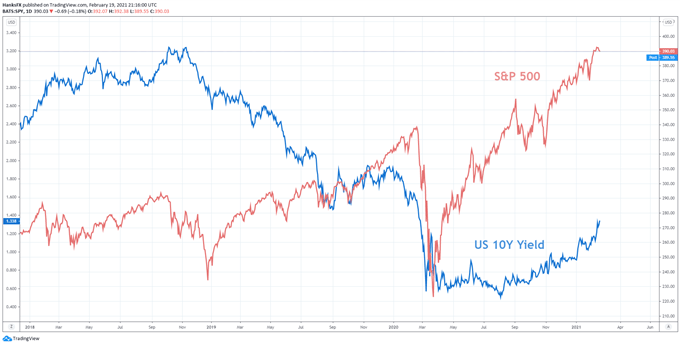 Nevertheless, risk appetite was trimmed last week despite encouraging economic data and enflamed reflation hopes. That being said, price action might suggest the market has entered a stage where the relationship between rising rates and equity exposure is becoming more of a tradeoff than it has been in recent months.

Should Treasury yields continue to climb, equities may face considerable headwinds – especially if the 10y yield overtakes the S&P 500 dividend yield. As it stands, the S&P 500 dividend yield rests around 1.5% with the 10y yield hovering around 1.3%. Since Treasuries are effectively risk-free, the risk premium offered through equity exposure is significantly reduced as rates rise and investors may rotate out of the stock market as a result.

Suffice it to say, the stock market is in a somewhat precarious position in some regards, but it is against a backdrop of improving economic data and a reopening economy. With that in mind, investors should closely track Treasury yields in the weeks ahead as they could prove vital to the performance of the S&P 500, Dow Jones and Nasdaq 100. In the meantime, follow @PeterHanksFXon Twitter for updates and analysis.