After months of beta testing, Twitter yesterday announced that it would allow users to tip creators on its social network with Bitcoin, alongside other traditional fiat-based methods. The Bitcoin tips are facilitated via the Strike app that runs on the Lightning Network. Twitter also announced that it would support NFT authentication. Earlier this year, Twitter CEO Jack Dorsey sold his first-ever tweet as an NFT and donated the $2.9 million sale proceeds to charity.

The announcement by Twitter pushed the cryptocurrency market higher despite social media company announcing in May that it was trialing the tipping service. Bitcoin moved back above $45k after trading below $40k at the start of the week, while a range of alt-coins recorded double-digit percentage gains. The market looked as though it was heading into the weekend on a strong note before news hit the screens of yet another China crackdown as the PBoC declared that all cryptocurrency-related activity was now illegal. China has a history of restricting cryptocurrency activity and while these announcements normally hit the market lower, these losses have always been short-lived. Today’s announcement saw Bitcoin shed around 5% and Ethereum around 8%.

The technical set-up for Bitcoin is weakening despite the CCI indicator remaining in oversold territory. BTC is now below all three simple moving averages, a negative scenario, while it is also back below the 38.2% Fibonacci retracement level around $42k. There is a cluster of prior highs, all three simple moving averages, and the 50% Fib retracement number blocking the way back to the September 18 high at $48,807, the first level BTC needs to break to resume a move back towards its multi-month high. 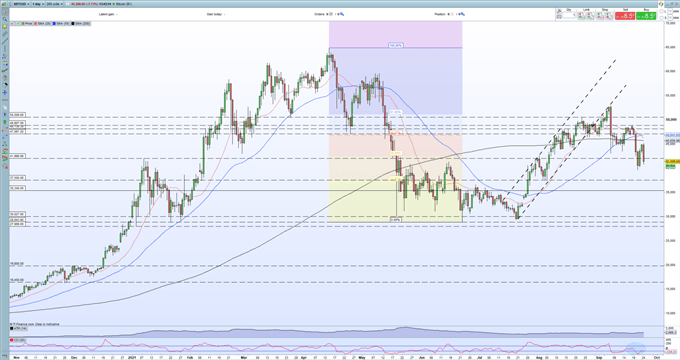 The alt-coin market is also under the pump and has given back around $400 billion since hitting its peak on May 12. It should be placed in context that the total market capitalization is still 4x to 5x higher than it was at the start of the year due to price appreciation and new projects. A look at the chart below – total crypto market cap less Bitcoin – shows a familiar chart pattern occurring, albeit slightly more condensed. If this pattern fully repeats itself, it suggests a short period of consolidation around these levels before another sharp move higher. 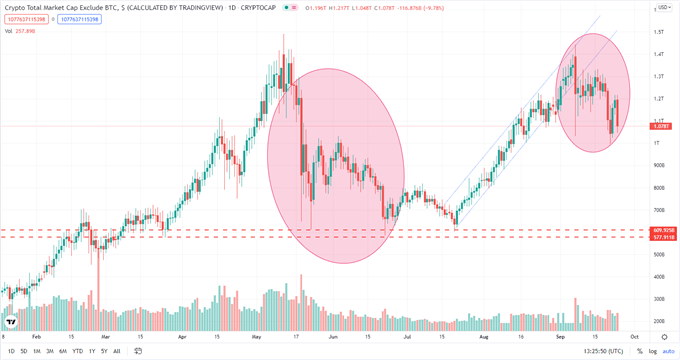 What is your view on Bitcoin and alt-coins – bullish or bearish?? You can let us know via the form at the end of this piece or you can contact the author via Twitter @nickcawley1.

Short-term Burst in Momentum May Develop

The Downside of Programmable Money