A cautiously optimistic tone prevailed in Asia-Pacific trade at the start of the global trading week. Regional shares rose alongside bellwether S&P 500 stock index futures and cyclical currencies like the Australian, New Zealand and Canadian Dollars. Meanwhile, the anti-risk US Dollar, Japanese Yen and Swiss Franc declined alongside Treasury bond futures amid ebbing demand for safety.

The upbeat backdrop probably reflected the near-certain passage of the US$1.9 trillion fiscal stimulus plan favored by the Biden administration after the legislation cleared the US Senate. It will now head back to the House of Representatives for another vote, where the Democratic majority seems very likely to cosign it. That will push the bill to the President’s desk for his signature.

On the commodities front, gold prices rose as the somewhat weaker Greenback buoyed the appeal of the standby anti-fiat alternative. Crude oil prices jumped to the highest level in over two years after Houthi rebels – the Iran-backed side in the Yemen civil war – attacked energy facilities in Saudi Arabia. While the strike did not appear to impact production, it does seem to mark escalation that portends future disruption. 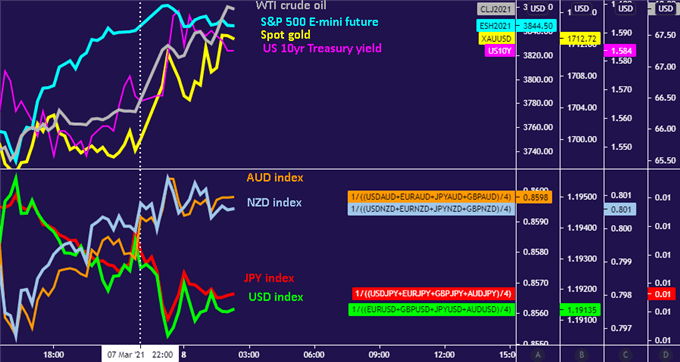 The data docket is relatively quiet in European trading hours. Bank of England Governor Andrew Bailey is due to discuss the UK economic outlook at a virtual event hosted by the Resolution Foundation, which may inform FX traders’ view of the British Pound. The currency has rallied so far in 2021, helped by a supportive shift in priced-in policy bets (implied in rate futures) amid firming signs of economic recovery. 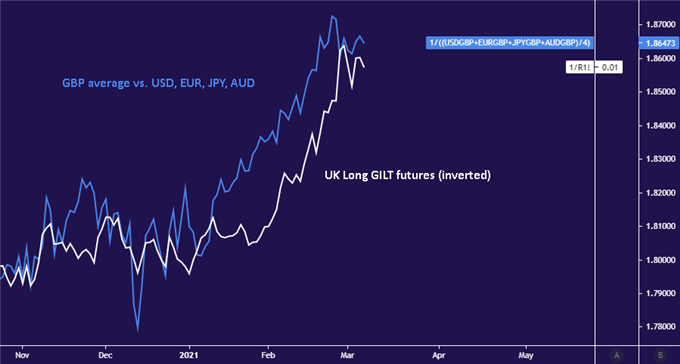 Beyond that, sentiment trends are likely to remain at the forefront. While a generous top-up of US stimulus is understandably supportive for risk appetite in that it is likely to buoy growth, its positive influence on cyclical assets may be moderated as investors ponder what it might mean for already-ascendant inflation expectations. Traders have worried that this might force the Fed to pull back monetary support sooner, lifting yields.

That might revive the US Dollar’s fortunes, especially against those currencies whose central banks have set interest rates in negative territory. The unit has tellingly added over 3.5 percent against an average of the Euro, Japanese Yen and Swiss Franc since the beginning of the year. It is modestly lower against those of its counterparts with greater return potential as growth picks up: the so-called ‘commodity currencies’. 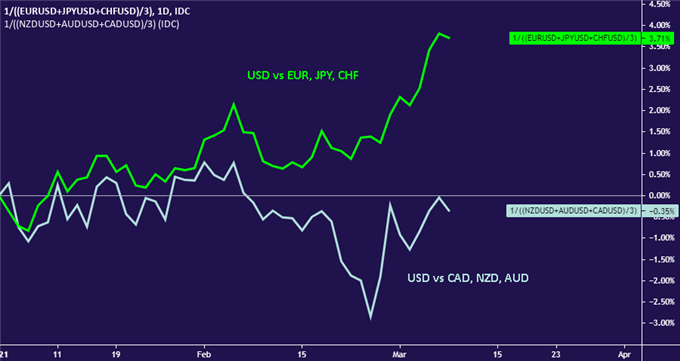