Looking ahead, a flurry of speeches from several members of the Federal Reserve headlines the economic docket alongside US new home sales data for January.

The US Dollar may struggle to gain ground against its major counterparts in the coming weeks, weighed down by dovish commentary from Federal Reserve Chairman Jerome Powell and the upcoming House vote on President Joe Biden’s $1.9 stimulus bill on Friday.

In the Fed’s semi-annual monetary policy testimony before Congress, Powell reiterated that “the economy is a long way from our employment and inflation goals” and therefore the central bank will maintain loose monetary policy conditions until “substantial further progress has been made” towards achieving its two mandated goals.

The Chairman also seem unperturbed by the recent rise in inflation expectations, stating that “inflation dynamics do change over time but they don’t change on a dime, and so we don’t really see how a burst of fiscal support or spending that doesn’t last for years would actually change those inflation dynamics”.

The current unemployment rate stands at 6.3%, sharply higher than its pre-crisis low of 3.5%, while the percentage of Americans employed has plunged from 61% before the pandemic to 57.5%. With that in mind, it appears that accommodative monetary policy settings are here to stay, which will likely keep the Greenback on the backfoot against its major counterparts. 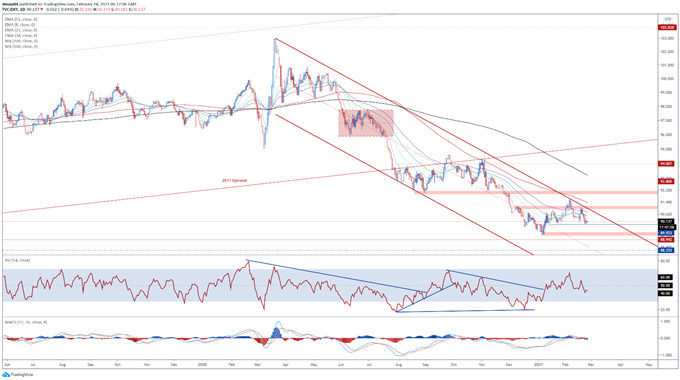 The technical outlook for the US Dollar Index (DXY) remains skewed to the downside, as price continue to track below all six moving averages and within the confines of a Descending Channel.

The development of the RSI and MACD are indicative of swelling bearish momentum, as both oscillators slide below their respective neutral midpoints.

A daily close below psychological support at 90.00 would probably intensify near-term selling pressure and generate an impulsive downside push to challenge range support at 89.20 – 89.40. Piercing that brings the 2018 low (88.25) into the crosshairs.

Alternatively, a rebound back towards the trend-defining 55-EMA (90.73) could be on the cards if support at 90.00 holds firm. 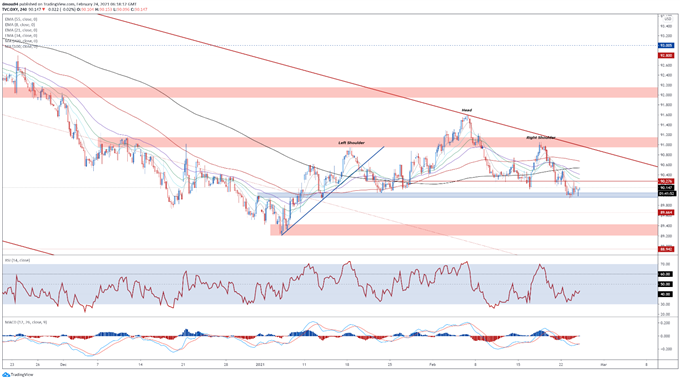 Zooming into a 4-hour chart bolsters the bearish outlook depicted on the daily timeframe, as price carves out a bearish Head and Shoulders reversal pattern.

A convincing break below range support at 89.95 – 90.05 is needed to validate the bearish reversal pattern and open the door for the index to retest the yearly low (89.21). The pattern’s implied measure move suggesting that price could fall an additional 1.7% from current levels to 88.40.

However, if range support remains intact a short-term recovery rally towards the sentiment-defining 200-MA (90.54) could eventuate.