The Dow Jones has held up well in recent days while other major U.S. indices underwent a bit of a correction. The sideways pattern over the last two weeks bodes well for the Dow, with horizontal price action not only good within the context of an uptrend, but also the fact that it is taking place at a prior record high.

The Jan high has held as the floor for the recent consolidation. Yesterday, we saw stocks dip early as technology led the way lower, but the reversal higher kept the DJIA from falling below support. On an advance from here there a couple of hurdles nearby to cross.

There is a top-side trend-line from June and January that cross over in roughly the same vicinity around 31800 up to 32100. It could act as a ceiling again, but not viewed as major resistance given it runs in the direction of the trend and at is around record highs.

On the flip-side, should the Dow fail, and it still good despite recently bullish price action, a decline to the March trend-line may be in order. A strong decline (daily close) below yesterday’s low of 31158 is viewed as needed to kick of such a move. 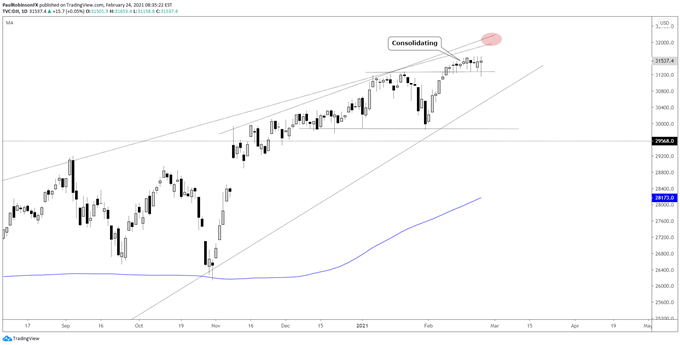 The S&P 500 was hit hard yesterday, but managed to recover to close slightly positive. It was just a couple of days ago we were discussing a potentially bearish pattern (RST pattern). The decline yesterday had this pattern in motion, with the March trend-line in play as a spot we could see a bounce develop before eventually breaking down. But given the power behind yesterday’s reversal the likelihood this pattern plays out to the downside has decreased.

With that in mind, as long as the low at 3805 holds then the trading bias is neutral to higher. If it breaks, though, that could be a big development as the powerful reversal day is negated and the March trend-line gives way. A trend-line that is growing with importance upon each test.