U.S. stock indices aren’t looking particularly strong these days, grinding higher by a handful of basis points at a time. The S&P 500 continues to ride along a top-side trend-line that could also constitute the last leg of a reverse symmetrical triangle, also known to some as a “Megaphone”. These patterns are marked by higher highs and lower lows that indicate a growing instability in the trend.

The lack of momentum at this juncture with the pattern formation suggests we may soon see a decline get underway. The prior high at 3870 is the first level of support, followed by the important March trend-line.

From a tactical standpoint, shorting markets like this can be a tough endeavor as they can continue to inch their way higher. It can become ‘death by a thousand cuts’. However, longs look at risk here, so existing short-term-minded longs may look to button up trailing stops, while fresh longs don’t hold much appeal from a risk/reward perspective.

Check out the Q1 INDICES Forecast

The Dow Jones looks similar to the S&P 500, but with its own twists. There isn’t the same reverse symmetrical triangle formation, but a top-side trend-line does exist. There is also a trend-line running over head from June that could be problematic with momentum weak. It won’t take much to dip back below the old high, with the March trend-line, as is the case with the S&P, being the major trend-line to watch on weakness. 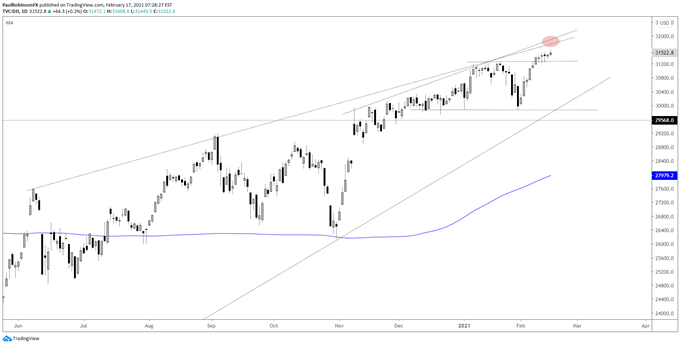