Equity markets gained ground during the Asia-Pacific session, as an underwhelming inflation report out of the US tamed fears of the Federal Reserve having to prematurely normalize monetary policy settings. Japan’s Nikkei 225 climbed 0.6%, while China’s CSI 300 and Hong Kong’s Hang Seng Index surged 2.09% and 1.22% respectively. Australia’s ASX 200 dipped marginally lower.

In FX markets, the risk-sensitive AUD, NZD and NOK largely outperformed, while the haven-associated USD, JPY and CHF retreated. Gold and silver prices extended recent gains as yields on US 10-year Treasuries hovered at 1.52%.

Looking ahead, the European Central Bank’s interest rate decision headlines the economic docket alongside jobless claims figures out of the US.

The European Central Bank’s upcoming monetary policy meeting will likely dictate the near-term trajectory of both the Euro and German benchmark DAX 30 index, with investors focusing on how the central bank plans to deal with the recent rise in borrowing costs.

Several members of the ECB have expressed concerns around the recent rise in regional bond yields, with head of open market operations, Isabel Schnabel, stating that “a rise in real long-term rates at the early stages of the recovery, even if reflecting improved growth prospects, may withdraw vital policy too early and too abruptly given the still fragile state of the economy”, adding that “policy will then have to step up its level of support”.

Chief Economist Philip Lane also suggested that the central bank will lean on the flexibility of its Pandemic Emergency Purchase Program (PEPP) to limit any unwanted tightening of financial conditions. 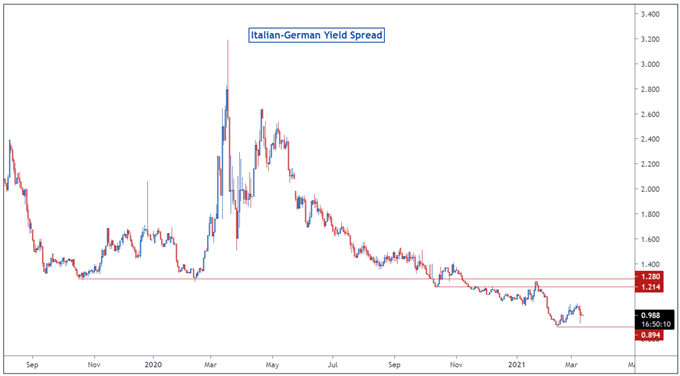 However, with the risk-gauging yield spread between 10-year Italian Government bonds and German Bunds still tracking firmly below the 2020 lows, the need for further easing seem relatively minute.

With that in mind, President Christine Lagarde and company may keep the central bank’s monetary policy settings as is and instead reiterate that they can increase the size of the PEPP if needed in the future.

This scenario would probably disappoint regional equity investors and take some wind out of the DAX 30’s sails, while opening the door for the Euro to climb higher against its major counterparts. 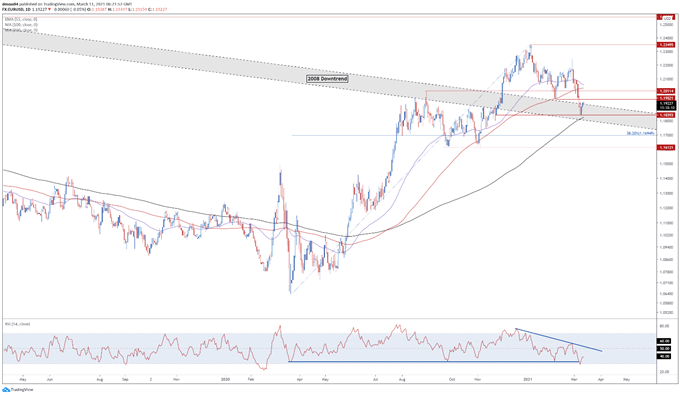 From a technical perspective, the EUR/USD appears poised to resume its primary uptrend extending from the March 2020 nadir, as price validates the breach of the 2008 downtrend and remains constructively positioned above the sentiment-defining 200-MA (1.1824).

The RSI’s swift recovery from its lowest levels in a year hints at building bullish momentum. Remaining constructively positioned above key support at 1.1900 would probably open the door for price to retest the monthly high (1.2133), if buyers can gain a firm foothold above the February low (1.1952). 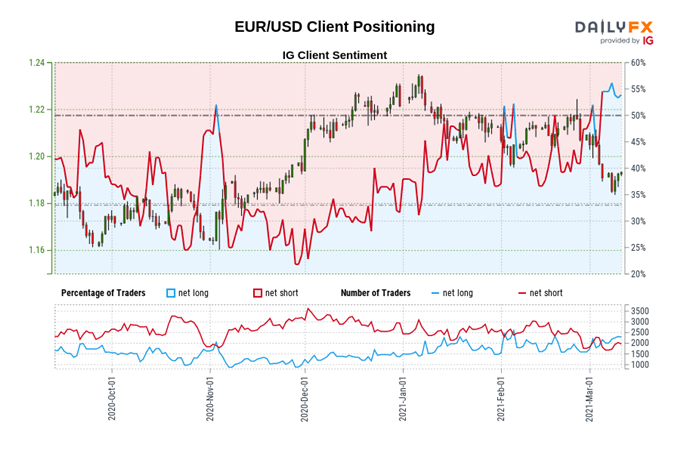 We typically take a contrarian view to crowd sentiment, and the fact traders are net-long suggests EUR/USD prices may continue to fall.

Traders are further net-long than yesterday and last week, and the combination of current sentiment and recent changes gives us a stronger EUR/USD-bearish contrarian trading bias. 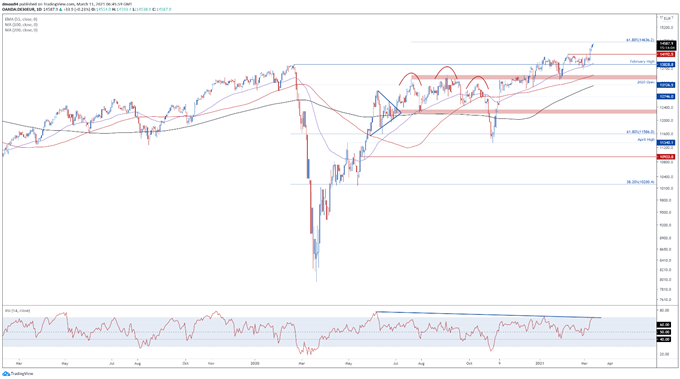 The DAX 30 has stormed to fresh record highs in recent days, after breaching key resistance at the February high (14192).

However, significant bearish divergence suggests that a short-term pullback could be on the cards. If resistance at the 61.8% Fibonacci holds firm, sellers could drive the index back towards former resistance-turned-support at 14200.

On the other hand, remaining constructively positioned above 14500 could pave the way for price to begin probing the psychologically imposing 15000 mark. 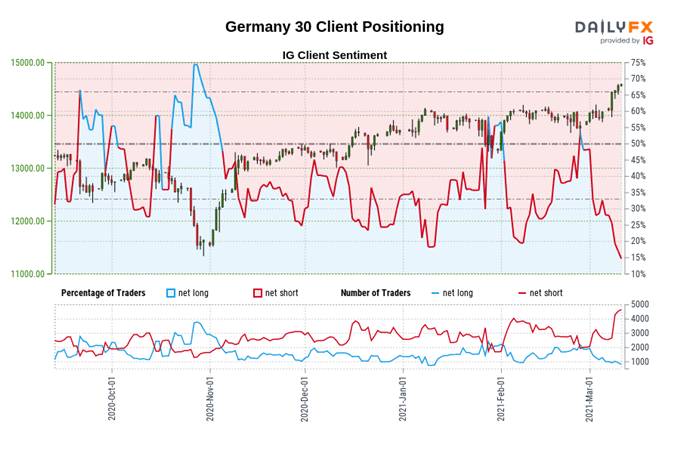 We typically take a contrarian view to crowd sentiment, and the fact traders are net-short suggests DAX 30 prices may continue to rise.

Traders are further net-short than yesterday and last week, and the combination of current sentiment and recent changes gives us a stronger DAX 30-bullish contrarian trading bias.

How to Trade EUR/USD