The Euro has held notably steady despite escalating tensions between Russia and the Ukraine. The single currency started the week with an upbeat tone after China weighed in against military action in the area, but the move fizzled after Moscow ordered troops to enter eastern Ukraine on a “peacekeeping” mission.

Intraday gains evaporated as prices retreated but EUR/USD closed little changed on the day, holding near the middle of the choppy range that has confined price action for nearly three months. By contrast, Germany’s benchmark DAX 40 stock index broke sharply downward, sinking to the lowest level in almost a year.

The standstill is still more eye-catching considering the markets have meaningfully scaled back ECB rate hike expectations in response to the crisis. The priced-in policy path implied in OIS markets has flattened from calling for five 10bps rate hikes in 2022 to just three.

Regional safety-seeking capital flows from East to West have probably helped. The Euro is trading at an eight-month high against the Ukrainian Hryvnia (UAH) and a ten-month high against the Russian Ruble. The cashing-out from relatively riskier investments – as evidenced by the DAX drop – may be another source of support.

Interestingly, the reversal of these dynamics when tensions ease means that EUR/USD may have limited scope for recovery. A cooling-off may not be far away if the current conflict broadly follows the playbook from the Russo-Georgian War of 2008.

In that engagement, Moscow dispatched troops to enable the de-facto separation from Georgia of two breakaway enclaves, Abkhazia and South Ossetia. They now amount to a militarized buffer zone between the two states. Russian forces advanced within a hair of the capital of Tbilisi only to turn back.

With President Putin having now recognized the independence of separatist Luhansk and Donetsk regions in eastern Ukraine and sent troops to reinforce it, a similar course of events might be unfolding. If it is no more than another buffer area that Moscow was after here, a downshift in active hostilities may be on the horizon.

Looking ahead, February’s IFO survey of German business confidence headlines the economic calendar and is expected to produce a second consecutive month of improvement after steady deterioration in the second half of 2021 was interrupted in January. A focus on geopolitics may push the data to the backburner, however.

Near-term support levels at 1.1272 and 1.1222 line up along the way to test the major barrier anchored at 1.1140, marked by former resistance dating back to March 2020. Alternatively, securing a foothold back above 1.1552, the upper bound of a recently broken support shelf, seems to be the prerequisite for upside progress. 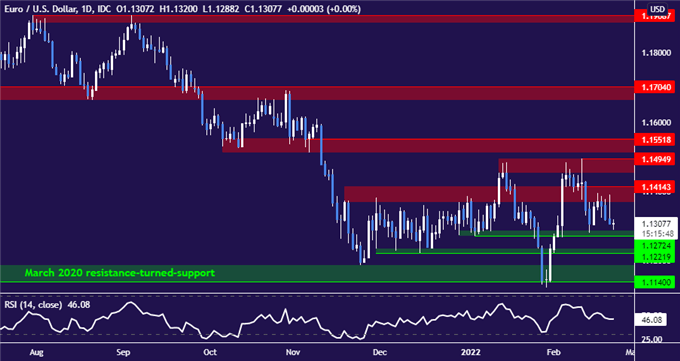 — Written by Ilya Spivak, Head of Greater Asia at DailyFX.com