It’s a big week for the Euro with an ECB rate decision on Thursday and inflation numbers due on Friday. And there’s significant drive elsewhere in the world, as well, which can certainly impact the major pair of EUR/USD and the cross pair of EUR/JPY.

The FOMC rate decision on Wednesday looms large for US Dollar trends, and the question remains as to just how much more hawkish the FOMC may get. There’s been signs of a tonality shift of late, with Jerome Powell recently making the move to retire the word ‘transitory’ that the bank had previously used to characterize inflation. This happened as inflation has continued to rage in the background, with last month producing a 6.8% increase in prices year-over-year.

EUR/USD came in contact with a massive zone of support three weeks ago and prices haven’t been able to break-below since. This is a zone between two longer-term Fibonacci levels at 1.1187 and 1.1212 and this isn’t the first time they’ve acted as a buffer for price action.

Since helping to hold the low in late-November, price action has digested into a symmetrical triangle since which illustrates this offsetting churn.

When that symmetrical triangle is combined with the prior bearish trend, that makes for a bear pennant formation, which can allow for a directional bias to be applied to the matter. This would keep the door open for another re-test of that zone. Near-term resistance around 1.1375 could be looked to as invalidation of the short-term bearish theme, and would open the door for a run up to the 1.1448-1.1500 zone on the chart.

If we do end up with intense risk aversion, the short side of EUR/JPY could be attractive. But, outside of that, the pair may be more optimal on the long side especially for those looking to back the ‘risk on’ theme in markets.

The big push point here is the Japanese Yen and whether or not rates continue to rise, which will likely be dependent on that FOMC rate decision on Wednesday. As discussed coming into Q4, the weak side of the Japanese Yen was extremely attractive in a higher-rate backdrop, namely from the carry trade. And that led to a really strong start to Q4 for EUR/JPY before the pair topped-out in October, at which point it’s continued to pull back ever since.

But the support level around 128.00 continues to loom large. This is a double bottom formation from August and September that filled in very well in October. And after the level came under attack again in late-November, sellers were challenged to find additional run below that level, which has allowed for buyers to push back-above while recapturing that price as support. This can keep the door open for a run back towards 129.50 or perhaps even the 130.00 psychological level in the pair. 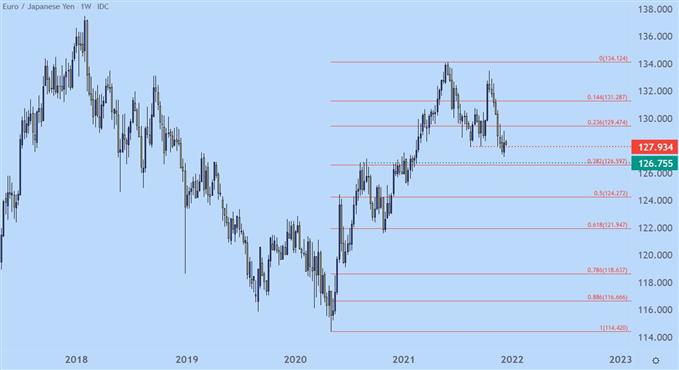