European natural gas prices are up ~30% this morning, as commodity markets focus on Russia’s invasion of Ukraine. Revisiting the balance details, latest announcements and commentary from leaders, points towards near-term risk to the continent’s gas supplies.

Russia is the world’s largest producer of natural gas and ~70% of Russian natural gas exports are sold into OECD Europe. There is no way for Europe to replace a meaningful portion of Russian supply. The continent has been, and is sure to continue, bidding all available LNG cargoes away from Asia and New England; however, continued Russian energy flows will be required to ensure Europe is able to provide heat and electricity to citizens and industry.

Following early conflict in Eastern Ukraine, Germany’s Chancellor Olaf Scholz halted the process for certification of Nord Stream 2, a recently completed but non-operational pipeline between Russia and Germany. In response, former Russian President Medvedev tweeted about rising European natural gas prices. As of Wednesday, Russian gas flows into Europe stood ~50% below the 5-year average, though no formal threats of supply reductions have been made. 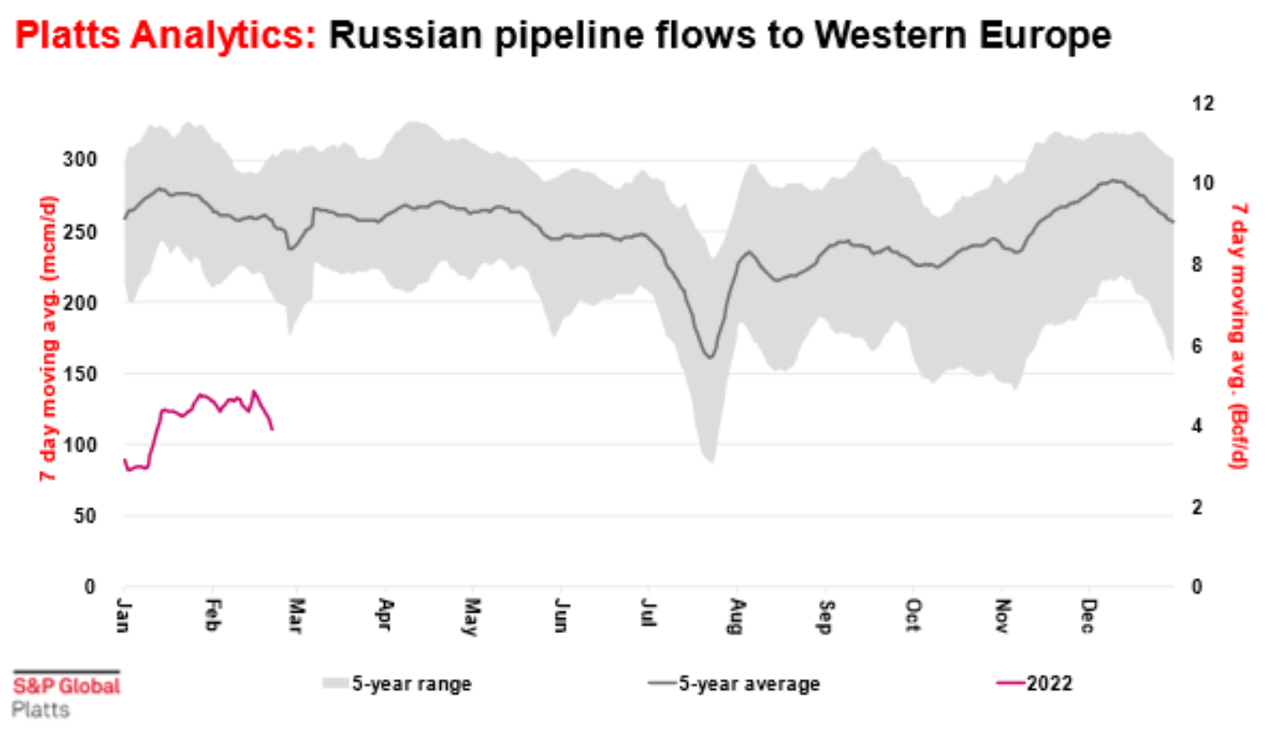 Western leaders have very consistently indicated that Russian sanctions should not target the energy sector. Prime Minister Mario Draghi’s comments from late last week reflect sentiments from leaders across Europe, “we are discussing sanctions with the EU and in the course of these discussions we have made our position known, that they should be concentrated on narrow sectors without including energy.”

European leaders have taken steps to reduce domestic energy supplies in recent months. Germany has shut half it’s nuclear fleet since December of last year. The UK shut a nuclear plant in January. While the Netherlands moved to reduced coal power generation 65% on January 1st. These measures have dramatically increased the continent’s reliance on Russian natural gas. As the conflict in Ukraine proceeds, the market will be laser focused on 1) Russian gas flows through Ukraine 2) comments from Russian leaders, indicating weaponization of natural gas flows 3) Europe’s willingness to make concessions to Russia to ensure security of gas flows, particularly as it relates to Nord Stream 2.

Originally Posted on: https://seekingalpha.com/news/3805026-european-gas-update-prices-rise-30-as-russian-invasion-proceeds?source=feed_tag_commodities
By: