The British economy is less impacted than the European Union over the threat of decoupling from Russia, insofar as the UK only gets 3% of its natural gas from Russia (compared to 45% for the EU). But as a European currency, the British Pound has been sucked into the maelstrom nevertheless, even though the UK’s sanction efforts towards Russia have been paltry at best.

The past 24-hours are offering a glimmer of hope for a resolution to the Russian invasion of Ukraine – even if doubts remain about the viability of recent negotiations. Ukraine President Volodymyr Zelenskyy has indicated that he’s willing to discuss a diplomatic solution after abandoning any pretense of joining NATO, suggesting that Ukraine is willing to come to terms with Russia’s demands for a “security guarantee.”

The mere prospect of an offramp from the current crisis has stoked a much-needed relief rally across markets. The battered European currencies are faring well, with safe havens like the Japanese Yen and US Dollar pulling back. While not anywhere near ground zero in financial markets in terms of impact, the net-result of improving risk appetite has proved beneficial for the British Pound (but more so for the Euro).

GBP/USD rates may be carving out a short-term bottom as a morning star candlestick pattern has begun to emerge on the daily timeframe. Even though momentum indicators are pointed lower – the pair is below its daily 5-, 8-, 13-, and 21-EMA envelope, daily MACD is trending lower, and daily Slow Stochastics remain in oversold territory – the rebound above the 23.6% Fibonacci retracement of the 2020 low/2021 high range at 1.3165 reinforces the notion of a bottom forming. A relief rally may soon setup a selling opportunity closer to 1.3400 in the coming days. 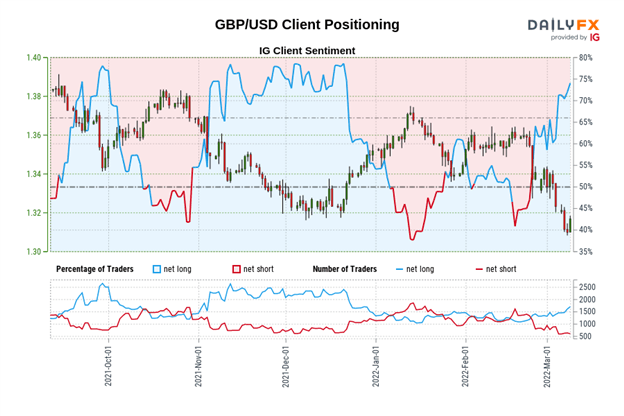 We typically take a contrarian view to crowd sentiment, and the fact traders are net-long suggests GBP/USD prices may continue to fall.

Traders are further net-long than yesterday and last week, and the combination of current sentiment and recent changes gives us a stronger GBP/USD-bearish contrarian trading bias. 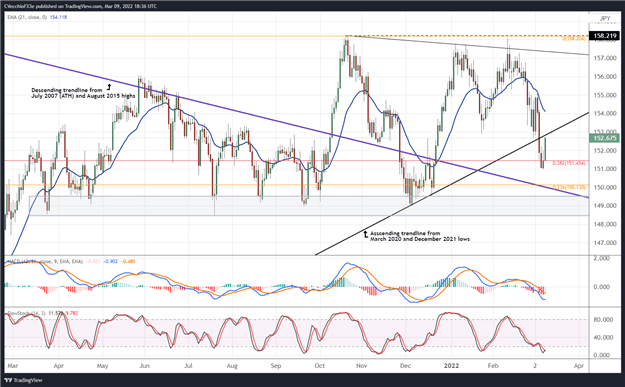 Similarly, GBP/JPY rates have reversed sharply higher and are on the verge of achieving a significant technical hurdle: returning back above the ascending trendline from the March 2020 and December 2021 lows. In doing so, it would return back into the symmetrical triangle that began to form in October 2021; a false bearish breakout would have transpired. Moreover, the pair never made its way below the descending trendline from the July 2007 (all-time high) and August 2015 highs, giving credence to a more significant rally henceforth. A return back to the daily 21-EMA, for which GBP/JPY rates have closed below every session since February 23, seems plausible in the near-term. 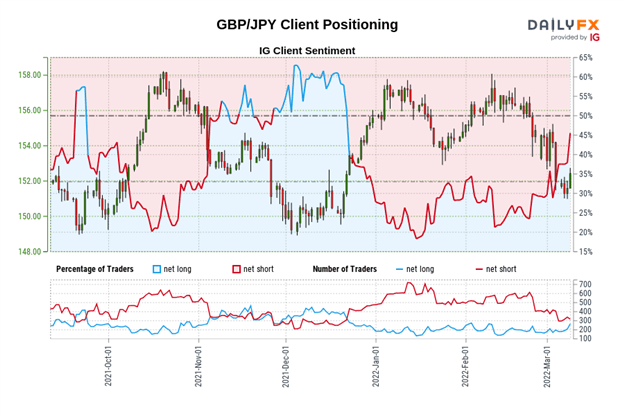 We typically take a contrarian view to crowd sentiment, and the fact traders are net-short suggests GBP/JPY prices may continue to rise.

Yet traders are less net-short than yesterday and compared with last week. Recent changes in sentiment warn that the current GBP/JPY price trend may soon reverse lower despite the fact traders remain net-short. 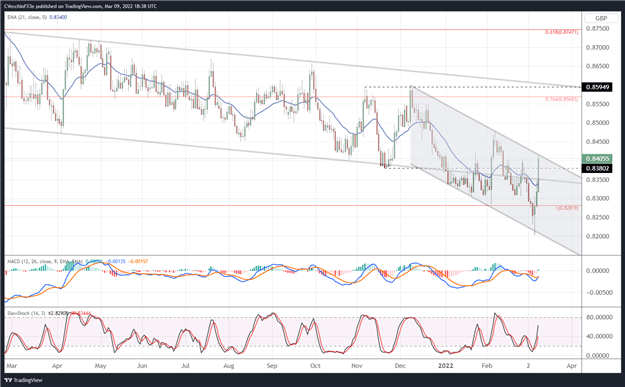 EUR/GBP rates just set a fresh yearly low two days ago, reaching channel support in the downtrend in place since mid-December. But the reversal has gathered pace rather quickly, and the pair has already reached channel resistance near 0.8415 on the session. Momentum indicators are turning bullish rapidly, with daily MACD close to issuing a bullish crossover (albeit below its signal line), while daily Slow Stochastics have already begun to advance above their median line. A move above 0.8415 would open the door for a return to the February high set at 0.8478, and beyond there, a rally into the December highs near 0.8600. 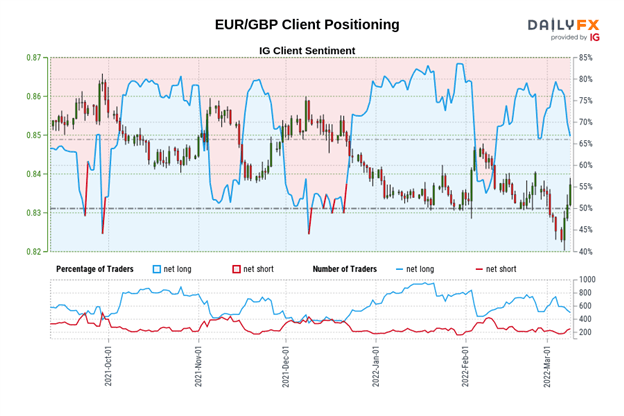 We typically take a contrarian view to crowd sentiment, and the fact traders are net-long suggests EUR/GBP prices may continue to fall.

Yet traders are less net-long than yesterday and compared with last week. Recent changes in sentiment warn that the current EUR/GBP price trend may soon reverse higher despite the fact traders remain net-long.