It took US inflation rates surging to their highest level since March 1982 and the emergence of a new strain of COVID-19 for markets to shift in a more cautious tone significant enough to provide gold prices a lift in Q4’21. Gold’s gains, however, were nary predicated on news around China’s Evergrande or a potential US debt ceiling breach, both of which have seemingly fallen by the wayside from market participants’ radar.

While posting a modest positive performance in the final quarter of 2021, the shift by several central banks – Federal Reserve included – to begin withdrawing pandemic-era stimulus efforts had begun to weigh on longer-term inflation expectations, pushing up real yields at various points in time, undercutting gold’s appeal.

Entering Q1’22, the challenges thus remain the same. Should western economies weather the Omicron variant surge over the winter months without a protracted slowdown in economic activity, central banks will likely to continue their efforts to taper asset purchases and bump up interest rates from near zero.

Here we are again, as we’ve been for the past several gold quarterly forecasts. The combined forces of elevated realized inflation in the short-term, met by central banks raising interest rates, and longer-term inflation expectations easing back, may prove to be too overwhelming to allow gold prices to sustain a significant rally.

Gold, like other precious metals, does not have a dividend, yield, or coupon, thus rising US real yields remain problematic. Put simply, when other assets are offering better risk-adjusted returns, or more importantly, offering tangible cash flows during a time when inflation pressures are raging, then assets that don’t yield significant returns often fall out of favor. This is true for gold prices just as it is true for high growth, zero revenue technology companies.

Gold Futures vs. US Treasury Nominal, Real Yields and US Breakevens: Daily Timeframe

The fact of the matter is that the bulk of stimulus provided by central banks and deficit spending implemented by fiscal authorities is now in the rearview mirror. These fundamental catalysts proved to be meaningful fuel for gold’s ascent in 2020, but even if Omicron rages, the political appetite for more stimulus in the face of persistently high inflation readings does not appear to exist.

Other factors may come into play, of course. China’s Evergrande and other property developers in the world’s second largest economy could default, provoking contagion that would ultimately weigh down global growth rates if Chinese economic growth falls towards some of the ‘secular stagnation’ rates long associated with western economies. But the US debt ceiling issue has been punted until after the 2022 midterms, leaving gold prices with few black swan-type events to look forward to that may supersede the real yields narrative. 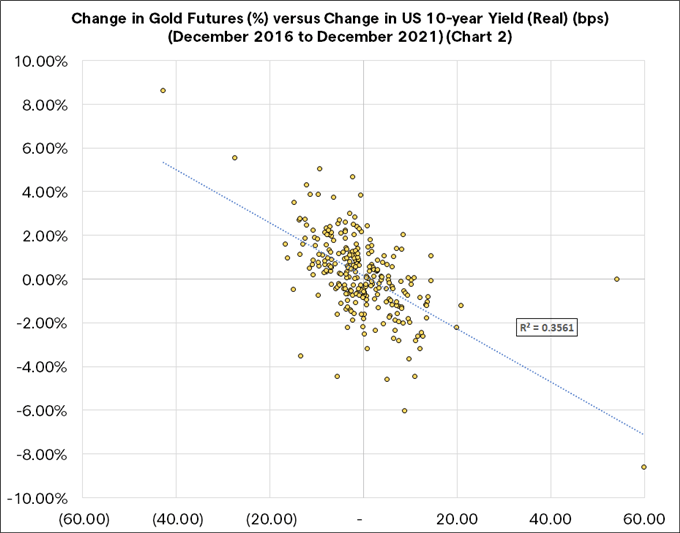 Over the past five years, gains by US real yields have been generally correlated with losses by gold prices. A simple linear regression of the relationship between the weekly price change in gold prices and the weekly basis points change for the US 10-year real yield, reveals a correlation of -0.36. As a rule of thumb, rising real yields are bad for gold prices, ceteris Paribas.

Gold May Prove More Resilient Than Other Commodities

The Omicron variant may prove to be less of a health concern and more of an economic concern in the short-term, meaning growth-linked commodities could struggle through the winter months in the Northern hemisphere. Alas, gold is not a growth-linked commodity but rather a safe haven; and to that extent, while gold prices may experience rocky, sideways trading in Q1’22, they still may outshine industrial base metals and energy prices over the coming months.