One of the knock-on effects of the Russian invasion of Ukraine and ensuing sanctions by the European Union and the United States has been a dramatic surge in commodity prices, particularly agriculture, energy, and base metals. Demand for safe havens has been boosted as well, with government bond yields plummeting in recent weeks.

The net-result? Rapidly rising inflation expectations, leading to a plunge in real yields. Now that real yields are dropping in the context of a risk-off environment in financial markets, gold prices have renewed appeal.

So it’s not just gold prices finding a bid in as a safe haven – though that’s a big contributor. Last week it was noted that “it’s World War 3 or bust, if gold prices are going to have any chance at a return to their highs set last week,” and for all intents and purposes, we seem to have embarked down that path: Russia has called the sanctions a “declaration of war”; and NATO involvement appears to be escalating with news that Poland may send old Soviet-era fighter jets to Ukraine as long as the US resupplies Poland with American-made fighter jets.

It’s been previously commented that “further upside is still possible, but it stands to reason that gold prices have already carved out their apex.” Further upside has been realized, but the apex in gold prices in late-February has been overtaken. Gold prices are now at their highest level since August 2020, and with the Russian invasion of Ukraine ongoing, the base case scenario is that a move to and through all-time highs is around the corner. 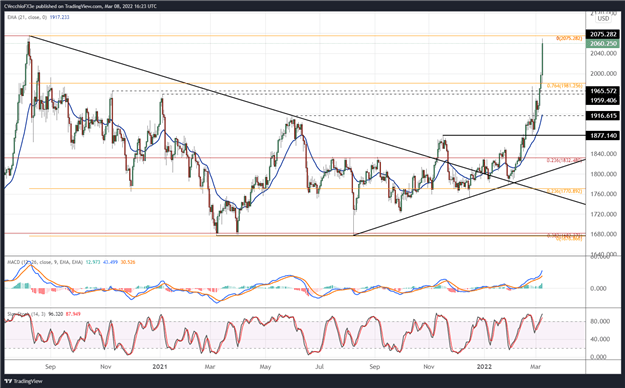 Last week it was noted that “another push higher is still possible in the near-term, with gold prices above their daily 5-, 8-, 13-, and 21-EMA envelope, which is in bullish sequential order.” Bullish technical momentum remains strong, with gold prices holding above their daily EMA envelope. Daily MACD continues to push higher, and daily Slow Stochastics are holding in overbought territory. Barring a ceasefire or reversal of sanctions – neither of which seem likely – gold prices are poised to overcome their all-time high set in August 2020 at 2075.28. Once cleared, we’re in unchartered territory; using the daily 5-EMA as a potential guide as support may be prudent. 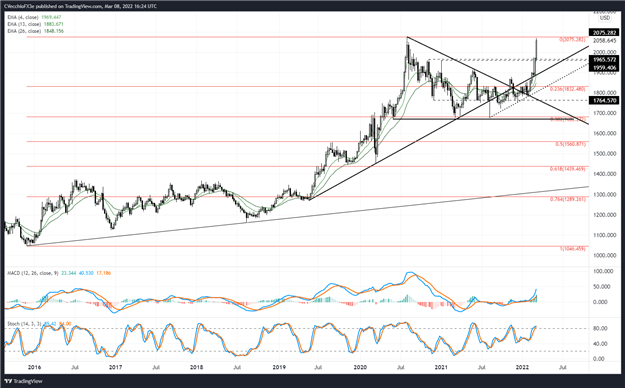 If there has been a silver lining to recent gold commentary, it’s been the observations made around the weekly timeframe. To this end, our commentary remains valid: “Nothing has changed over the past few days for the longer-term technical outlook. The longer-term technical outlook has taken on a more bullish tone, suggesting that another push higher towards 1974.49 can’t be ruled out in the near-term. Gold prices are above their weekly 4-, 13-, and 26-EMA envelope, which is in bullish sequential order. Weekly MACD is trending higher while above its signal line, and weekly Slow Stochastics have advanced into overbought territory.” 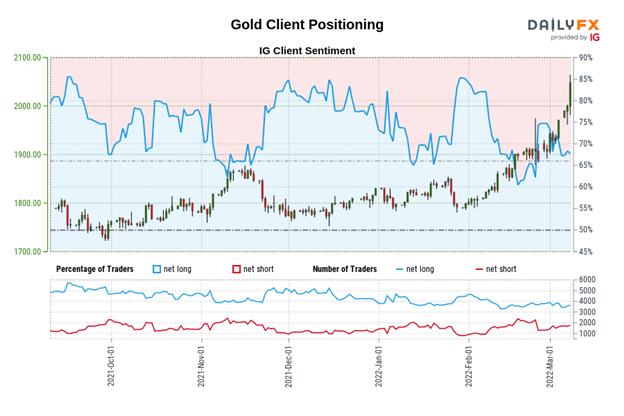 We typically take a contrarian view to crowd sentiment, and the fact traders are net-long suggests Gold prices may continue to fall.

Yet traders are less net-long than yesterday and compared with last week. Recent changes in sentiment warn that the current Gold price trend may soon reverse higher despite the fact traders remain net-long.

Inca One reports highest ever gold sales in April