The recent advance in the price of gold appears to have stalled ahead of the monthly high ($1832) as it snaps the series of higher highs and lows from earlier this week, and the precious metal may consolidate during the Federal Reserve’s blackout period as it trades within the opening range for January.

The price of gold struggles to hold its ground after showing a kneejerk reaction to the dismal US Retail Sales report, and the precious metal may trade within the monthly opening range ahead of the next Fed interest rate decision on January 26 as central bank officials go off the wires.

It remains to be seen if the Federal Open Market Committee (FOMC) will react to the mixed data prints coming out of the economy as Chairman Jerome Powell strikes a hawkish tone in front of US lawmakers, and speculation for an imminent change in regime may produce headwinds for bullion as the central bank appears to be on track to implement higher interest rates over the coming months. 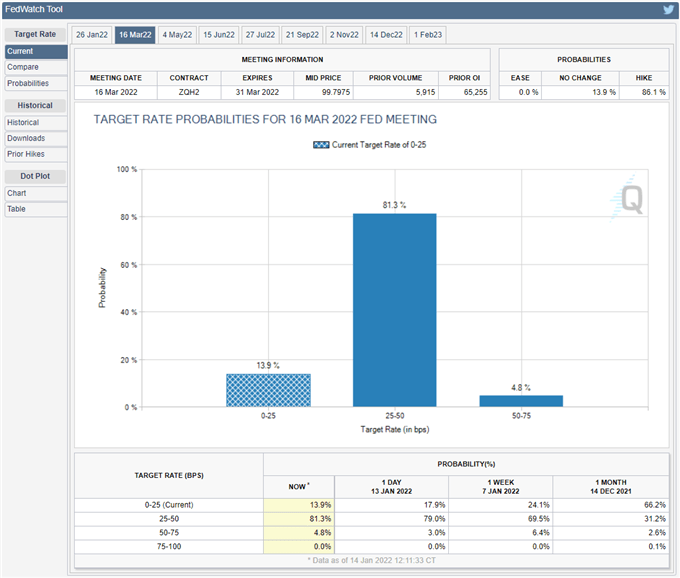 According to the CME FedWatch Tool, Fed fund futures are currently pricing a greater than 80% probability for a 25bp rate hike in March, and the FOMC may utilize the next rate decision to unveil a more detailed exit strategy as Governor Lael Brainard reveals that “we started to discuss shrinking our balance sheet” while testifying in front of the Senate Committee on Banking, Housing and Urban Affairs.

With that said, bullion may consolidate during the Fed’s blackout amid the failed attempt to test the monthly high ($1832), and the price of gold may track the January opening range over the coming days as it snaps the series of higher highs and lows from earlier this week.