The Euro shot higher out of a narrow congestion range that kept it anchored against the US Dollar for three months, from mid-November 2021 to the middle of January 2022. Immediate follow-through has not materialized however, with technical positioning now offering conflicting cues about next steps.

On one hand, it seems notable that the surge was unable to find even two days of momentum after prices idled for as long as they did. One might have surmised that pent-up breakout pressure might have carried the single currency higher. That the move stalled near a multi-year inflection point near 1.15 is eye-catching too.

The rise appears corrective from this perspective, marking a healthy retest near former support in the mid-1.15 zone before the sequence of lower highs and lows carved out from May 2021 is resumed. Confirmation of this scenario might begin with a close below 1.1355, followed by a breach of rising counter-trend support.

On the other hand however, it is difficult to miss that the pullback following the initial surge stopped squarely on a downward-sloping barrier connecting major peaks for the duration of the long-term trend. This might mean that a bullish breakout has already occurred, and the pullback is in fact corrective before another push higher.

In this case, buyers appear to face a difficult road ahead as a slew of back-to-back obstacles in the form of former support levels line up to derail progress. Re-establishing a firm foothold above the 1.17 figure seems to be a pre-requisite for a convincing argument in favor of a lasting bullish trend reversal.

Sentiment data echoes the conflicted cues on the technical side. A very narrow 54.56% majority of retail traders favor Euro gains. Crowd positioning is typically a contrarian indicator, so the net-long setting might imply a bearish argument, but the split is so close to 50/50 that the signal seems quite weak for now.

Nevertheless, the net-long skew has grown by 3.4 percent from the prior week and 5.2 percent from the preceding session. This narrowly bolsters the bearish case, hinting that a shift toward a more Euro-negative positioning mismatch may be afoot. Such thinking does not seem actionable without further evidence however. 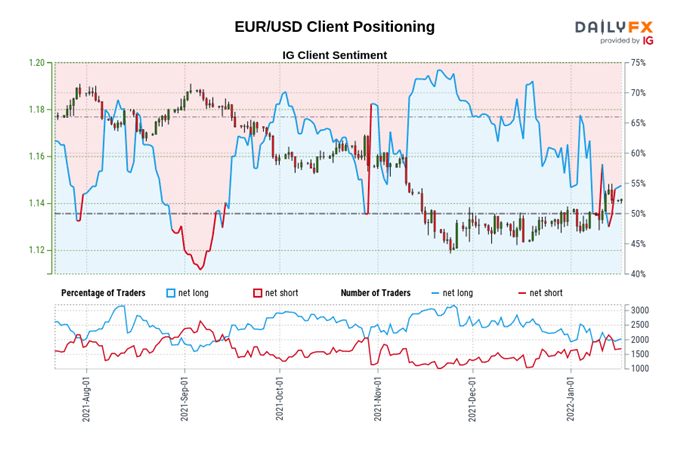