During the fourth quarter, energy infrastructure companies repurchased $650 million of their equity in aggregate. This represents a step down from 3Q21 repurchases of just over $800 million but is more than double the $300 million spent on repurchases in 2Q21. MLPs accounted for the bulk of repurchase activity in 4Q21, headlined by MPLX’s (MPLX) $165 million in repurchases, Enterprise Products Partners’ (EPD) $125 million, and Western Midstream’s (WES) $113 million, which exhausted its prior $250 million buyback authorization. Also in the quarter, Plains All American (PAA) bought back $61 million in units, and Magellan Midstream Partners (MMP) repurchased another $50 million in units, bringing its total buyback spend to $800 million.

Aside from actual repurchase levels, there have been a few notable developments since Alerian’s 3Q21 buyback note. In December 2021, Enbridge (ENB) announced a $1.5 billion share repurchase plan, commencing in early January 2022 and expiring in January 2023. Last month, alongside the introduction of an enhanced distribution framework, WES announced a new $1 billion buyback authorization for opportunistic repurchases through year-end 2024. 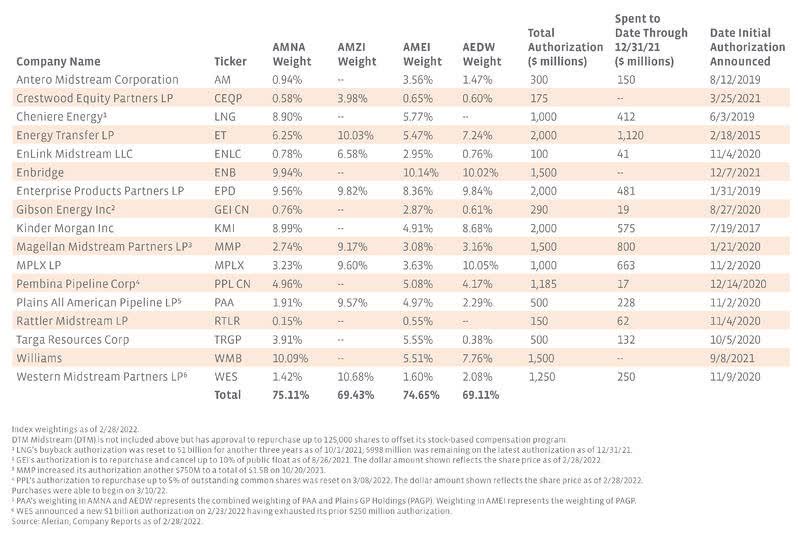 What is the outlook for midstream buybacks given recent price appreciation?

While midstream has long been known for its attractive yields, buybacks fueled by significant free cash flow generation have enhanced shareholder-friendly returns. With AMNA and AMZI both up approximately 20% through March 17 from their fourth-quarter relative lows on December 20, 2021, investors may be wondering if companies will continue to be as active with buyback programs, particularly those that take a very opportunistic approach. Admittedly, names that have seen significant price appreciation from macro tailwinds may be more measured with buybacks than in recent quarters. Buybacks may also be weighed against dividend increases, which have become increasingly prevalent for the space (read more). With the outlook for significant free cash flow intact as capital budgets remain moderate, companies are enjoying financial flexibility and optionality with how they return cash to shareholders, whether it be through buybacks or dividends.

Disclosure: © Alerian 2022. All rights reserved. This material is reproduced with the prior consent of Alerian. It is provided as general information only and should not be taken as investment advice. Employees of Alerian are prohibited from owning individual MLPs. For more information on Alerian and to see our full disclaimer, visit Disclaimers | Alerian

Originally Posted on: https://seekingalpha.com/article/4497245-mlps-leading-midstream-buybacks-q421?source=feed_tag_commodities
By: