While central banks like the Bank of Canada and the Reserve Bank of Australia lodge complaints about the Federal Reserve due to the status of their appreciating currencies, the Reserve Bank of New Zealand has a different opponent when it contends with its appreciating currency: itself. The recent change in the RBNZ’s remit actually makes its monetary posture more hawkish relative to its previous moorings, and moreover, much more hawkish than other central banks.

This particular nuance that sets the RBNZ apart from other central banks makes the New Zealand Dollar more resilient during periods where market participants get spooked due to rising global bond yields. And during periods where growth-linked assets are doing well, the New Zealand Dollar now stands to be the poster child of the carry trade once more.

From a weekly perspective, NZD/JPY rates are on track with what is our longer-term bullish point of view: a bottoming process has commenced. NZD/JPY rates continue to trade higher following their break above the descending trendline from the January 2014, July 2017, December 2018, and August 2020 highs.

Momentum remains bullish weekly timeframes. Rates continue to hold above the 50% Fibonacci retracement of the 2015 high/2020 low range at 76.77, while the pair is still above its weekly 4-, 13-, and 26-EMA envelope. Weekly MACD remains at its highest levels since early-2017, while weekly Slow Stochastics continue to linger in overbought territory. All-in-all, it appears a longer-term bottom has been established.

On the daily timeframe, the recent pullback in NZD/JPY rates (like NZD/USD rates) appears ‘orderly,’ insofar as the pair’s drop brought it back to its daily EMA envelope, which never buckled or saw the shorter-term EMAs fall out of bullish sequential order. Bullish momentum remains firm, and the pullback itself was absorbed neatly by the aforementioned 50% Fibonacci retracement. Daily MACD remains in bullish territory and trending higher, while daily Slow Stochastics have turned higher again above their median line. The path of least resistance remains to the topside for NZD/JPY rates.

NZD/USD rates experienced a quick downdraft last week but appear to be recovering cleanly. NZD/USD is trying to reestablish itself above its daily 5-, 8-, 13-, and 21-EMA envelope, which lost its full bullish sequencing (daily 5-EMA dropped below daily 8-EMA). Daily MACD is still trending lower but remains above its signal line, but daily Slow Stochastics, while turning higher, did fall below their median line. All in all, it’s noteworthy that the recovery hasn’t been as robust as in NZD/JPY rates; similarly, if your disposition is that US Treasury yields (among others) can continue to rise, it’s likely that NZD/USD lags NZD/JPY. 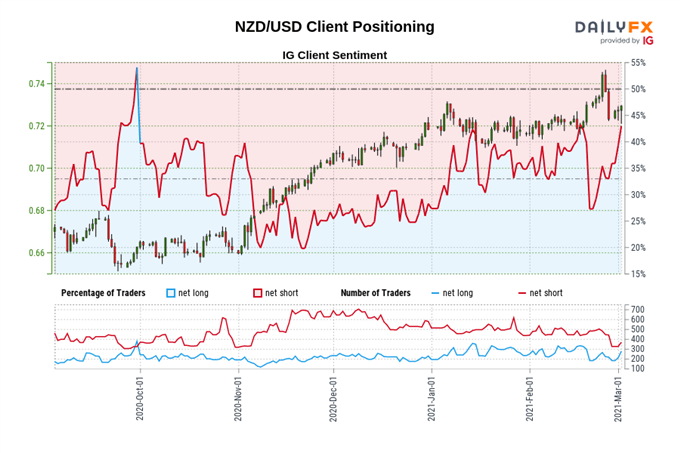 We typically take a contrarian view to crowd sentiment, and the fact traders are net-short suggests NZD/USD prices may continue to rise.

Yet traders are less net-short than yesterday and compared with last week. Recent changes in sentiment warn that the current NZD/USD price trend may soon reverse lower despite the fact traders remain net-short.