Asia-Pacific markets are facing a mixed open after a volatile US trading session. The benchmark S&P 500 rose 0.66%, and the tech-heavy Nasdaq-100 (NDX) climbed 0.5%. A rosy unemployment claims number underscored strength in the US job market, with initial claims for the week ending September 03 falling to 222k from 228k in the prior week. However, an aggressive Federal Reserve rate hike path may temper further equity gains in New York.

Short-term Treasury yields rose after a speech by Federal Reserve Chair Jerome Powell. The Fed chief reiterated his commitment to bring prices down and commented that pulling back on policy tightening too soon presents its own risks. The FOMC is expected to deliver a 75-basis point hike on September 22.

Asian currencies fell overnight against the US Dollar, dragging the Australian Dollar, South Korean Won and the New Zealand Dollar lower. The Australian Bureau of Statistics reported a larger-than-expected drop in the country’s July trade surplus. The data highlights the impact of China’s broadening Covid lockdowns. Iron ore and coal exports fell by 15% and 17%, respectively.

The Fundamentals of Breakout Trading

China’s consumer price index (CPI) for August is due at 01:30 GMT. Analysts expect to see the CPI rise to 2.8% from 2.7%, on an annual basis.However, the month-over-month increase is expected to cool to a 0.2% rate. A hot inflation number would potentially complicate efforts to increase credit growth in the country.

NZD/USD fell around 0.3% throughout European and New York trading. The South Korean was also lower against the Greenback. Traders are growing bearish on APAC currencies despite falling crude oil prices, which are generally supportive. But slowing growth in China poses too much risk to the region. South Korea, last week, reported a record trade deficit for August.

Elsewhere, India announced plans to put a 20% export levy on rice exports. Rice futures rose over 1%, although prices remain down around 3% for September. The move may underpin prices in the short term. Asia consumes the bulk of India’s exported rice. That said, the impact is likely contained to the APAC region, at least for now.

NZD/USD is contending with its July low again. With prices down nearly 1% this month and following a 2.76% decline in August, a relief rally may be on the cards. If so, the falling 9-day Exponential Moving Average (EMA) would pose an obstacle for bulls as it did through the second half of August.

A break above that EMA would bring the 20- and 50-day Simple Moving Averages (SMAs) into focus. The MACD oscillator is moderating, which may lead to a signal line crossover, which could spark a move higher. 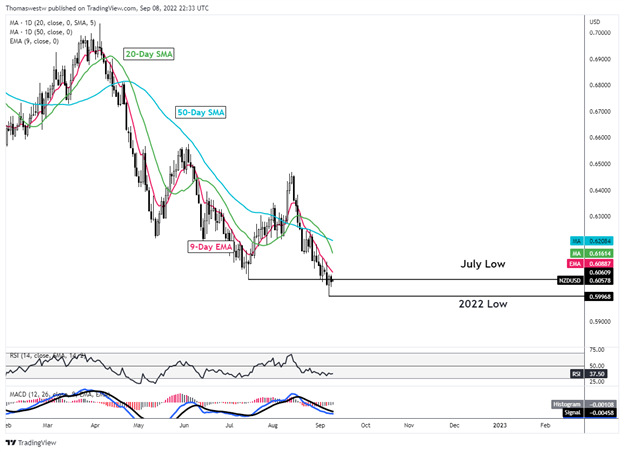