The sentiment-linked New Zealand Dollar aimed cautiously higher this past week despite another wobbly week for global stock markets. On Wall Street, the Dow Jones and Nasdaq Composite declined about 1.5% and 1.1% respectively. Things also did not look well in Europe and Asia. The FTSE 100, DAX 40 and Nikkei 225 fell 1.9%m 2.5% and 2.1% respectively.

What might explain the divergence between the Kiwi Dollar and market sentiment? Will this continue in the week ahead? One likely source is fading hawkish Federal Reserve monetary policy expectations. According to the CME FedWatch Tool, odds of a 50-basis point hike in March declined to about 21% compared to almost 50% a week ago. That helped weaken the US Dollar, boosting NZD.

Geopolitical tensions and less-hawkish Fedspeak were likely causes of this. All eyes next week will be on a meeting between the US and Russia. The former still believes that the latter is poised for an attack. Watch out if more Fed policymakers reference Ukraine. Meanwhile, New York Fed President John Williams said he did not see a ‘compelling argument’ for a large first-rate increase.

The Reserve Bank of New Zealand’s first interest rate decision of the year is in focus on February 23rd. The central bank is expected to raise rates to 1.00% against 0.75% prior. Almost 7 rate hikes are priced in from overnight index swaps this year, making for what could be a potentially aggressive tightening cycle. This does mean that the central bank has a lot of expectations to meet.

Fourth-quarter New Zealand inflation and labor market data did surprise to the upside, making the case for an aggressive RBNZ. Still, the risk for the Kiwi Dollar could be tilted to the downside if the central bank does not manage to live up to such aggressive hawkish bets. This may result in a classic “buy the rumor, sell the news” situation.

On the other hand, taking a close look at the chart below, a majors-based New Zealand Dollar index can be seen struggling to follow the push higher in local 10-year government bond yields. The latter is a sign of increasing hawkish RBNZ policy bets. So perhaps the Kiwi Dollar has some catching up to do. Still, it is difficult to ignore the negative impact of fading market sentiment. With that in mind, it is a neutral call for the NZD in the week ahead. 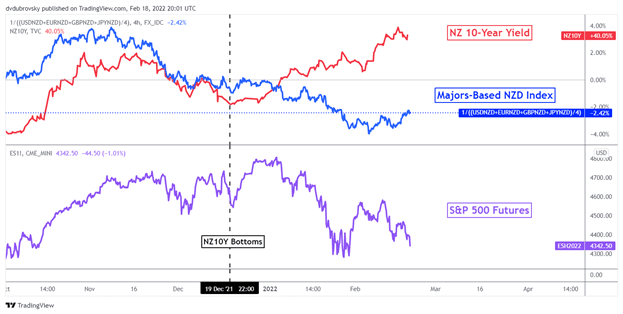