House Speaker Pelosi said Thursday that Democrats will present a bill on gasoline price gouging next week. The bill will enable the President to issue emergency declarations making it illegal to increase gasoline prices, according to Bloomberg Energy reporter Javier Blas: 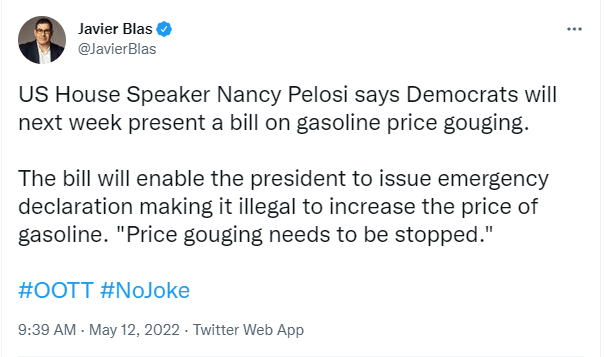 Recent efforts by government officials to lower fuel prices have included some unusual proposals. Following talks between Biden and Mario Draghi earlier this week, the former head of the European Central Bank and current Italian Prime Minister suggested that oil importers could create an “oil buying cartel.” While most analysts dismissed the comment, as Western countries have no mechanism in place to ration consumption, Thursday’s statement from Pelosi makes the “buyers cartel” proposal a bit more realistic.

Given the Speaker represents the party in control of both Congress and the White House, the statement is unlikely to be ignored. So as the bill works its way through Congress, energy investors are sure to focus on the intended and unintended consequences of a gasoline price cap.

First, it’s worth noting that the US exports a lot of oil products. Over the past three months, the US has exported ~2.9mb/d of “finished petroleum products” like gasoline, jet fuel and diesel. A shortage of oil products globally, paired with price caps domestically, would naturally lead refiners to export even more product. Although this would help European allies manage their current shortages, it could exacerbate shortages already popping up in the US. Thursday, two of America’s largest truck-stop chains, Love’s and Pilot, said they are closely watching low diesel fuel supplies in the Northeast amid growing concerns of industry-wide shortages.

While inflation, largely driven by energy costs, has been a drag on approval ratings, fuel shortages would not likely help. Which could raise the likelihood of an oil product export ban, similar to the crude oil (USO) export ban in place between 1975 and 2015. Unable to export product, US refiners would likely reduce production to balance the domestic market, resulting in lower fuel prices at home, but further accelerating shortages abroad. The impact on US and global refiners could be dramatic.

Spiking international fuel prices on the back of curtailed US exports would benefit non-US refiners, including Imperial (IMO), which operates three large refineries in Canada but has no capacity domiciled in the US. It would also help European refiners like Saras (OTCPK:SAAFY) and Repsol (OTCQX:REPYY). Domestically, refiners like Valero (VLO) and Marathon (MPC) would see reduced volumes and lower margins, while Exxon (XOM) would likely outperform Chevron (CVX), given the company’s higher exposure to non-US refining.

It’s too soon to say what the first and second order effects of mandated price caps would be. The bill has not yet been proposed and the details are largely unknown. Though recent comments from the White House and European leaders make it clear that increased fuel costs will be met with dramatic political measures. For investors in the energy sector, policy steps are likely to be a major focus in coming weeks, ahead of what are likely to be very strong Q2 results.

Originally Posted on: https://seekingalpha.com/news/3837964-pelosi-to-propose-bill-allowing-president-to-make-gasoline-price-hikes-illegal?source=feed_tag_commodities
By: