So, it’s worth addressing up front and if you’re reading this you likely already know, but the continued saga between Russia and Ukraine will likely remain as a push point for oil prices. This is a volatile and unpredictable situation. So as usual caution and risk management are warranted, perhaps even moreso than usual given the loaded and unpredictable nature of some of the players involved.

This drive was very much on full view in the early portion of last week. Oil prices spiked as fears mounted that sanctions would massively diminish supply in oil markets, which would in-turn push up prices. WTI ran up and tested above the 100 psychological level for the first time since 2014, which is around the last time that Russia was in the headlines for their geopolitical relations (but that time was because they invaded and, eventually, ‘annexed’ Crimea).

But on Thursday as sanctions were announced, it came as a surprise to many that Russian oil was not included and that helped oil prices to relax, giving back more than 10% ahead of the weekend and finishing this week’s bar as a doji formation.

Did We Just See Capitulation?

Strength in oil prices isn’t a new thing and as you’ll notice from the above weekly chart, two weeks ago showed the first red bar since December, which amounted to eight consecutive weeks of gains. And in the early portion of last week, buyers were fledgling until Wednesday night/Thursday morning when news began to cross the wires that the attack and invasion were underway.

That’s what led to the spike, similar to Gold and in both cases that strength quickly dissipated. There could be more room for reversal, however, and that’s what can make the short side of the matter as attractive. When much of the market is looking in one direction, it’s often time to start looking in the other.

Retail traders remain heavily long on crude oil as of this writing, and this becomes yet another factor of interest for bearish scenarios. This is accented by the recent shifts in positioning, with retail jumping on the long side of the pair even as this pullback developed off of the $100 handle.

We normally take a contrarian view to IG Sentiment reads and the fact that longs increased so much over the past week while shorts decreased, this highlights the fact that prices may have topped, at least for a little while, and this can also point to bearish potential.

To learn more about IGCS, the link below will take you a guide that goes in much deeper detail behind the indicator. 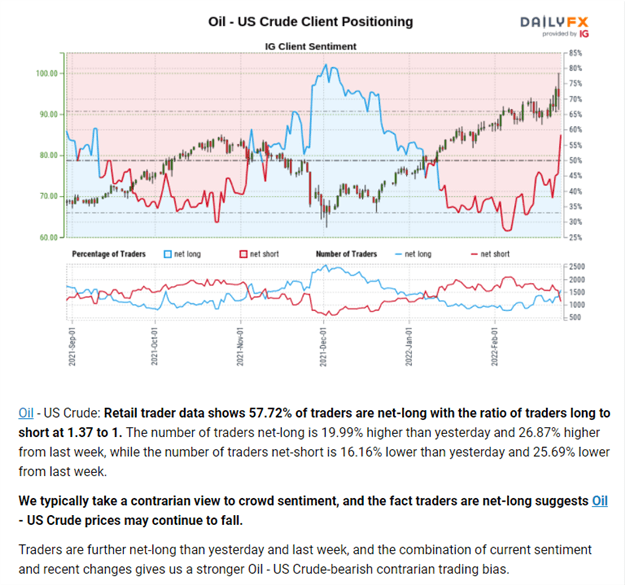