The uncertainty around the pound is linked to the fact that despite lofty rate hike expectations, domestic challenges (inflation, higher taxes, weaker growth outlook) continue to drag the pound lower. The dollar appears to have halted the post-FOMC pullback and looks supported heading into the weekend – which is negative for the pound. Despite the dollar recovery GBP/USD bounces off the lower bound of the descending channel, moving higher on Friday.

UK Inflation Data Topping the Risk Events for Next Week

Wednesday is a rather busy day for the pound as it sees the latest UK inflation data as well as the half-yearly budget speech. UK inflation continues to hot up with early indications anticipating a 5.9% print for February. The real talking point shifts to next month’s release which is likely to capture some of the inflationary pressures resulting from the extraordinary spike in oil prices earlier this month. Inflation is expected to peak in April at 8%

Half Yearly Budget Speech in Focus Amid Cost-of-Living Squeeze

UK finance minister Rishi Sunak has emerged from one crisis, the pandemic, only to deal with another in the form of rampant inflation. Sunak is due to announce his half yearly budget update next Wednesday amid increasing pressure to spend billions of pounds to lessen the impact of a growing cost-of-living squeeze. At the same time, the UK government is looking to normalize levels of government spending after the Covid spending surge

Sunak has mentioned that difficult decisions have been made alongside his view to cut taxes in the future. This comes after agreeing to raise social security contributions from April this year and the introduction of a sizeable hike in corporation tax in 2023. The UK government tax take is on track to reach levels last seen in the 1950s and is likely to weigh on disposable incomes and domestic spending.

UK Government Spending ‘To the Moon’?

‘To the moon’ has become a popular expression among cryptocurrency and meme stock enthusiasts, describing the parabolic rise in value of various cryptos or stocks in the past. While the expression does not quite apply to the rate of rising UK government debt, there is certainly an upward trend when it comes to fiscal spending – something that UK finance minister Rishi Sunak is desperately trying to get on top of.

To give you an idea the level of increase in government spending, UK government gross debt as a percentage of GDP has risen almost four-fold since the early 1990’s and breached 100% for the financial year ending March 2021. For context, the figure had been hovering between 80 and 85 percent for the last decade. 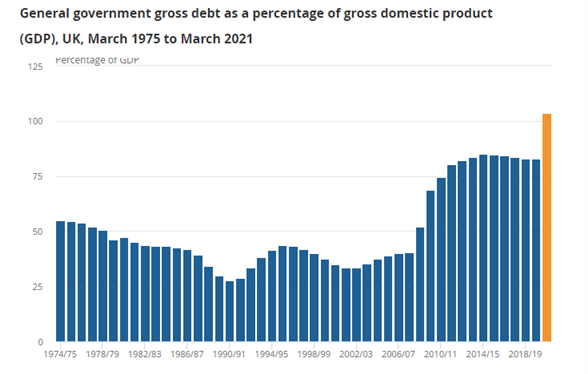 A significant portion of the pandemic-induced borrowing was captured within the financial year of April 2020 to March 2021, shown below, which amounted to over 15% of GDP over the year. 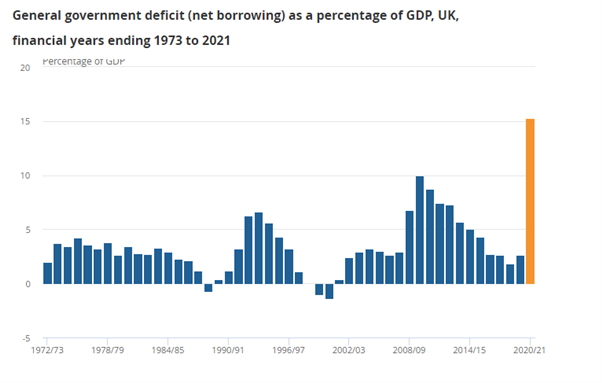 Of course, factors such as inflation and the pandemic need to be taken into account but at the same time the UK government will be looking to reduce the gross debt number as interest on debt is set to increase throughout the Bank of England’s anticipated rate hike cycle. Additionally, around one quarter of UK government debt attracts interest payments that are tied to the rate of retail price inflation which continues to rise.

— Written by Richard Snow for DailyFX.com