Yesterday’s riotous price action across global markets slightly eased today as markets come to grips with the war in Europe. The dollar was bid as often realized in extreme cases of risk aversion – even outshining traditional safe haven currencies like the Japanese Yen and Swiss Franc respectively. The Euro was no exception coming under pressure and reaching lows last seen in June 2020.

These moves are largely predictable in a situation like this but with concerning comments from certain ECB officials, the short-term outlook for the Euro looks bleak. Friday’s comments from the ECB’s Lane revealed fears around the negative impact of the war on 2022 Euro zone GDP – estimated to be around 0.3% – 0.4%. Declining economic growth coupled with rampant inflation is allowing for the re-emergence of the stagflation narrative and could weigh negatively on the Euro.

Geography has added to the mix with the Euro zone discernably more exposed to the conflict than the U.S. but what some may be overlooking is Europe’s reliance on Russia and Ukraine for commodities from oil to agriculture; giving the dollar more dominance and more scope to push the EUR lower.

THE WEEK AHEAD: ECONOMIC CALENDAR

Next week there are several key economic announcements from both the U.S. and the Euro zone but with geopolitics determining market movements, their bearing may be limited. The Fed and ECB now have a tricky task ahead as hawkish pressure may be fading while inflation remains high. Two standout releases next week come from Euro zone core inflation and U.S. NFP data but with uncertainty around what will transpire with Russia and Ukraine, one has to favor the dollar in this instance as investors flock to safety. 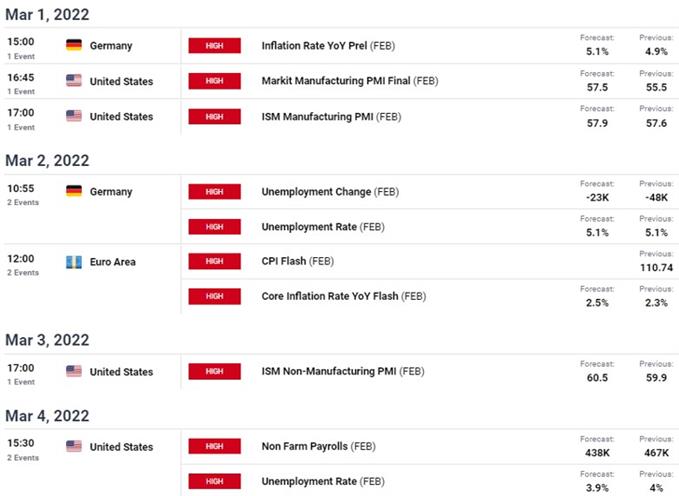 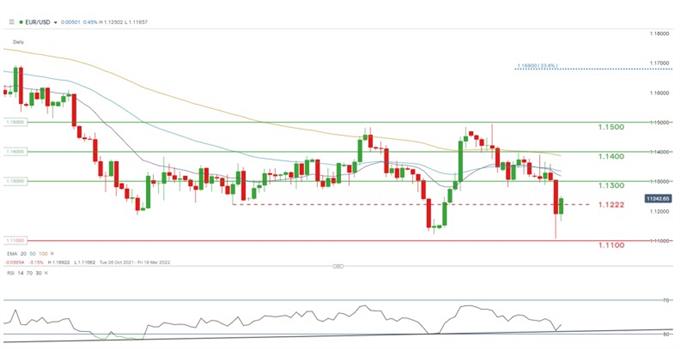 From a technical perspective, the EUR/USD daily chart above found support around the 1.1100 psychological handle after quickly finding some buyers. This could be attributed to a deliberate attempt by investors to prop up financial markets as fierce reversals were seen across the board.

I anticipate further downside to come despite the prospect of bullish divergence (contrast between the RSI reading (trending higher) and EUR/USD price action (trending lower)).

IGCS shows retail traders are currently LONG on EUR/USD, with 60% of traders currently holding long positions (as of this writing). At DailyFX we typically take a contrarian view to crowd sentiment resulting in a short-term downside bias.

Inca One reports highest ever gold sales in April