Global stocks markets were roiled as Russia’s attack on Ukraine prolonged for over a week. European markets were particularly damaged, with the DAX 40, FTSE 100 and Euro Stoxx 50 sinking 10.11%, 6.71% and 10.41% respectively. These were some of the worst performances since the outbreak of Covid-19 induced stock markets volatility about two years ago.

Wall Street was better off, but not positively. The Dow Jones, S&P 500 and Nasdaq Composite declined 1.3%, 1.27% and 2.78% respectively. Weakness in the tech sector continues to be influenced by the road ahead for monetary policy. Look no further than to February’s Non-Farm Payrolls report. The US added 678k jobs versus 423k anticipated as the unemployment rate ticked lower to 3.8% versus 3.9% anticipated. It should be noted that a 50-basis point hike from the Federal Reserve this month was priced out.

However, this year, 5 hikes are still anticipated, as well as quantitative tightening. This is why the central bank is in a pickle, because Ukraine is unfolding into a tightening cycle. The markets are increasingly pricing in a recession. Below is a spread between 10-year and 2-year Treasury yields, which fell by the most since 2019 last week. Inversion is not that much further away, signaling fading confidence that the Fed will be able to raise rates and offer a ‘soft landing’.

All Eyes on US CPI, ECB and Ukraine

As geopolitical tensions mount in Europe, the Federal Reserve has its own battle to face at home, inflation. This coming week, February’s CPI report will cross the wires on Thursday. Headline inflation is anticipated at 7.9% y/y, up from 7.5% prior. This means price growth will likely continue pacing at 40-year highs. Chair Jerome Powell said it himself, that it is too early to see if Russia changes the rate path.

This is precisely what the markets were doing when Russia attacked Ukraine, bringing down tightening expectations. It is unclear at this point just by how much this could influence the central bank. Chicago Fed President Charles Evans said that there is a ‘tremendous amount of uncertainty due to the Ukraine invasion’. He also added that the central bank ‘needs to be moving to a more neutral policy’.

In addition to raising rates, quantitative tightening is also likely around the corner. As such, it will be key to continue monitoring the balance sheet in addition to Ukraine. On the chart below, periods of balance sheet growth slowdown have been associated with weakness on Wall Street.

In what could be partial relief for EU markets, the European Central Bank could use Ukraine to take a less hawkish outlook. Prior to the attack, the ECB began bringing up rate hike bets amid rising EU CPI. While inflation is running cooler there compared to the US, it has been on the rise and may keep doing so as energy prices push higher. All things considered, there is a lot of uncertainty in markets, and this may be something that continues to pressure stock markets lower ahead. 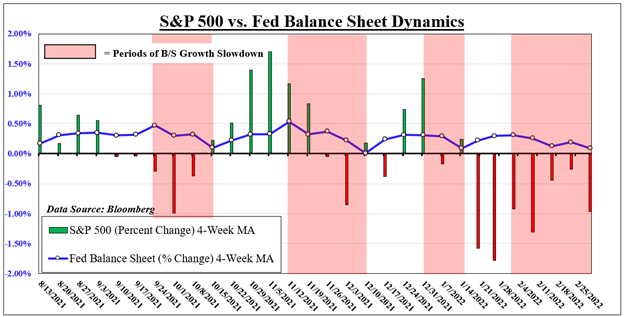