The US Dollar has set another fresh 19-year high this morning, driven by another 40-year-high print on inflation. And given the strength shown already in the Greenback through the first twelve days of July, that’s saying something. The trend in inflation may be one of the strongest around markets currently, save for the US Dollar, of course. But, even after 150 basis points of hikes, there’s no sign yet of inflation slowing down.

US Headline CPI Since January, 2018

This continued jump in CPI, combined with the Bank of Canada getting a bit more aggressive at their rate decision this morning, have helped to firm odds of a heavier lift at the next FOMC meeting. There’s now a 48.8% probability of a 100 basis point hike from the Fed at that meeting, and this has been running-higher all morning so we may see this continue to get further priced-in. 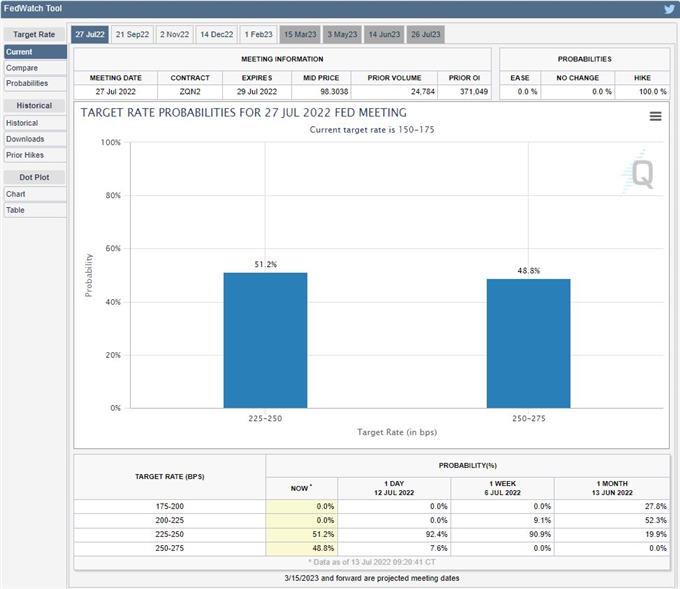 There’s been a pattern over the past couple of months, where the USD gains in the early portion of the month only to pull back in the second-half of the period. This happened in May after the Dollar set a high on May 13th and again in June after the USD peaked around the FOMC rate decision on June 15th. And each of those instances saw the USD pull back to key supports, with prior resistance showing up in May and the 103.82 prior high from 2017 coming into play at the end of last month.

There’s a bit of a curveball this month, however, as the FOMC rate decision takes place on July 26-27, so we may see USD-strength push into month-end if the Fed does, in fact, go for 100 bps at that next rate hike.

But, as I’ve been discussing in these pieces for some time, the bigger question to the US Dollar’s bullish trend is the ECB. If the European Central Bank continues to sit on negative rates, even as inflation runs-higher in the Euro-zone, there’s not much of a compelling argument to look for Euro strength against the US Dollar, and this backdrop is precisely what’s allowed for parity to print in the world’s most popular currency pair.

In the Greenback – that parity print looms large. If EUR/USD sellers aren’t going to be able to leave that behind just yet after it started to come into play, USD could back-down from current levels, similar to what was seen in May and June. This wouldn’t necessarily reverse the bullish trend, as that would probably need a much more forceful had from the ECB. But – this could allow for pullback in the longer-term bullish trend of USD.

EUR/USD Puts Up a Fight at Parity

I had talked about this yesterday in Euro Price Action Setups, but the parity level is perhaps the most important psychological level on the chart. It’s one of those factors that can change behavior patterns, hence the term ‘psychological level.’ The price of .9999 will often feel much cheaper than just 2 pips below 1.0001, and this can compel traders to bid the market when it ‘feels cheap.’

That’s not to say that a level of that nature cannot be broken. But, it does often take some additional force and in many cases you need some help from the fundamental side. There’s wherewithal for this to take place in the near-term, too, as next week brings another European inflation figure and if we see that print with a 9 handle – as the ECB is expected to only hike by 25 basis points at their meeting later this month – and we can see that compelling reason quickly come into the picture.

Why would higher inflation in Europe drive a bearish move while higher inflation in the U.S. drive a bullish move? The central bank, and the expected adaptation that the bank would make in response to that data. Higher inflation in the US spells a more aggressive Fed, such as we’re seeing in rate expectations this morning. But, in Europe? It truly seems as though the bank is afraid of putting the economy in a tailspin by hiking rates. So that higher inflation would be read as more capital erosion, further putting more pressure on future inflation as there’s now also the problem of a falling currency to contend with.

There’s a falling wedge that’s been building in GBP/USD and similarly, this can keep the door open for some short-term pullback potential. The resistance side of that formation currently plots to around 1.1950, which keeps the door open for a move up to prior support in the 1.2000-1.2021 area, with the former level a major psychological level and the latter a Fibonacci level.

Ok, back to some fundamentals. The Bank of Canada surprised this morning when hiking by 100 basis points. But, this may turn out to be a way of re-taking control of the narrative around inflation. The bank talked about front-loading rate hikes in the effort of arresting inflation, which would allow the bank to be a bit more open-minded at future meetings rather than having to pre-commit to more and more hikes in the hope that markets will begin to price that in advance.

In USD/CAD, the pair was in a pretty pensive spot coming into this morning’s rate decision and that hasn’t really changed. From the daily chart below, we can see the range tightening up with resistance continuing to hold from around 1.3050-1.3077.

The Bank of Canada’s surprise helped to push price down to support this morning, around 1.2950 which is confluent with an aggressively-sloped bullish trend line. But, as yet, no breaks, meaning there’s still both a bullish and bearish setup here. On the bullish side, buyers have continued to press at higher-lows, with this morning the most recent iteration of that theme. And, on the bearish side, there’s a double top that’s now turned into a triple top and, so far, buyers simply haven’t been able to hold ground over 1.3050.

USD/JPY set a fresh 24-year-high on the heels of that CPI release earlier this morning. Prices had previously found support around the prior resistance zone of 136.70-137.00 and price action has already made a push back to this zone after the breakout didn’t find much continuation after that CPI release.

I remain bullish there but the primary issue at this point is positioning. The daily chart shows this well, as we’ve seen a resistance hold at the psychological level of 137.50 over the past couple days. There hasn’t been much for pullbacks, as the USD pullback in late-June didn’t really show much in USD/JPY with bulls pushing for higher-highs. USD/JPY did track the pullback in late-May and, similar to DXY above, that led to an absolute launch in early-June. But, my quandary here is that the pair feels overbought, even with fundamentals favoring continued topside.