Discover what kind of forex trader you are

US equity markets marched higher on Thursday after US President Joe Biden signed the $1.9 trillion Covid stimulus package into law. White House Press Secretary Jen Psaki stated that the $1,400 stimulus checks may begin to hit bank accounts as early as this weekend. President Biden will speak later today to discuss the economic benefits of the newly minted plan.

The Nasdaq 100 closed 2.36% higher, with technology stocks seeing some of the biggest gains throughout Thursday’s session on Wall Street. The small-cap Russell 2000 trailed closely behind, closing 2.31% higher, while the S&P 500 and Dow Jones Industrial Average (DJIA) moved 1.04% and 0.58% higher, respectively. Longer-dated Treasury yields pushed higher on stimulus-induced inflation concerns, with the 10-year yield rising by 1.26%.

The risk-on move seen on Wall Street was also bolstered by this morning’s weekly jobless claims figures, that showed the United States received 712k initial claims for the week ending March 6 versus an expected 725k. The labor data points to a stronger than expected recovery as more and more people receive Covid-19 vaccinations. 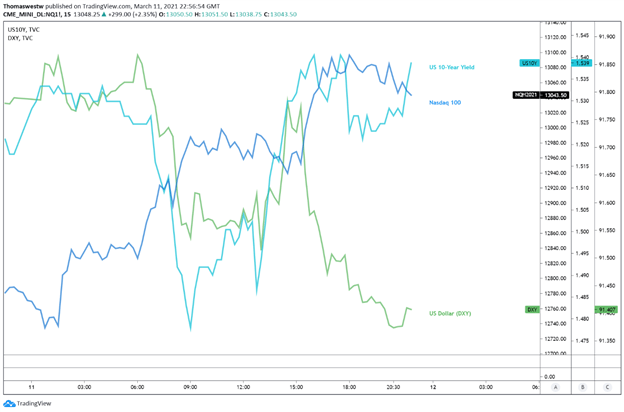 Asia-Pacific markets appear poised to end the trading week higher after the upbeat US session. The US $1.9 trillion stimulus package is expected to have spillover effects into the global economy, bolstering growth as travel and trade recover as consumers travel and spending ticks higher.

Japan’s Nikkei 225 rose 0.60% on Thursday while Hong Kong’s Hang Seng Index (HSI) ended 1.65% higher. Mainland China’s Shanghai Composite and CSI 300 rose 2.36% and 2.49%, respectively. Elsewhere, Australia’s ASX 200 closed unchanged on Thursday but is already gaining in Friday morning trading. Safe-haven assets such as the US Dollar are on the back foot, with the DXY below the 91.5 mark.

Australia will see economic data in the form of new home sales for February cross the wires this morning. China will also release data on foreign direct investment (FDI) for February. Moreover, Hong Kong will see industrial production for Q4 hit the press and later in the day India will also release industrial production data, according to the DailyFX Economic Calendar.

The Australian Dollar is reflecting the risk-on sentiment seen on Wall Street as it strengthens against the Greenback. AUD/USD climbed 0.69% higher on Thursday, overtaking the 50-day Simple Moving Average and 50% pseudo-Fibonacci retracement level from the February major move. A move higher would secure the recapture of trendline support – which was breached to the downside earlier this month. Alternatively, a move lower may see support at the 61.8% Fibonacci level. 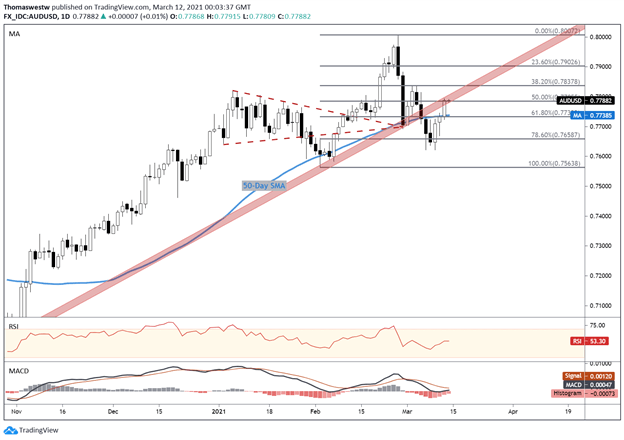