As series of simple moving averages (SMA)are clustered near the current price, which might suggest that the market is lacking direction and could be moving sideways for now.

While these might lack directional momentum, the longer term 100- and 200-day SMAs remain below the price and both have positive gradients. This could suggest that there is underlying bullish momentum evolving.

After making a 3-month low at 78.790, AUD/JPY spent last week rallying after it closed back inside the lower band of the 21-day SMA based Bollinger Band.

The low of 78.790 was just below the September low of 78.846 and these levels might now provide support.

The price has moved above the 10-day SMA which could suggest that short term bullish momentum may unfold. 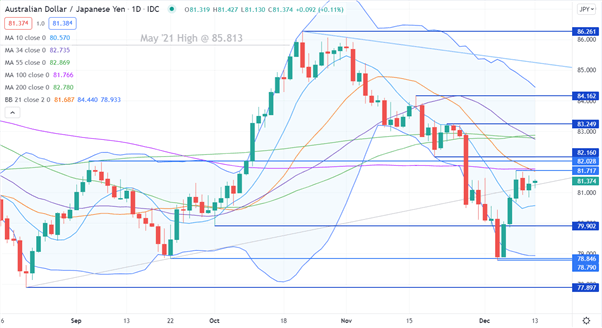