The Japanese Yen gained just over half a percent against the US dollar in Q3, with July strongest. Despite gains, the Yen remained weaker than the Greenback. USD/JPY’s bearish performance may have set the stage for further Yen weakness after a series of lower highs formed the resistance level of a Symmetrical Triangle pattern. Prices subsequently broke higher in late September.

USD/JPY’s weekly chart highlights the strong Q1 performance before prices started to consolidate. That consolidation formed the Triangle, setting the stage for the current breakout. The 2021 high at 111.65 serves as a primary price target. The 2020 high at 112.22 is just above it, providing a healthy chance for prices to dispatch that level once the yearly high is breached.

The daily chart shows the breakout’s strength, with prices rising from triangle support to breaking above resistance in 48 hours. The 50- and 100-day Simple Moving Averages (SMA) were both overtaken during the rally. The 61.8% Fibonacci retracement provided confluent support for bulls to drive prices higher.

The 23.6% Fibonacci may provide some resistance, as seen in June and July. If prices cleanly break that level, there is a path to the 2021 high. The MACD oscillator crossed its center in late Sept., signalling momentum. The Relative Strength Index is tracking higher within neutral territory. A retracement to former triangle resistance is possible, but bulls would look to turn that level into support – atypical for post-triangle breakouts. 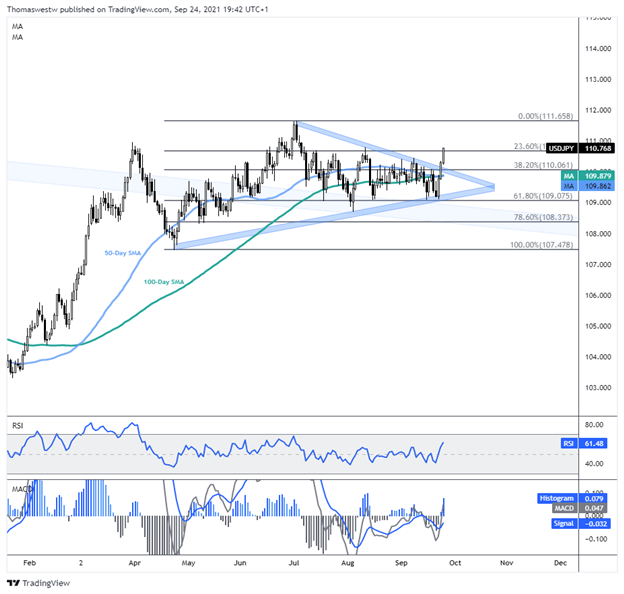 Will Markets Scale the Wall of Worry into Year-End?