BTC/USD has a parabolic curve to use as a guide

BTC/USD has been again rallying within the context of a well-defined parabolic curve (on the log-scale chart given the extreme % moves). The curve could continue to hold for some time, or it could soon fold – either way it may be the best price action guide we can follow right now.

Parabolic curves are of course an unusual occurrence in the marketplace (although they seem commonplace today!) – they only occur when things begin to bubble up. Eventually they break (and in a big way), but until they do, crazy can become crazier. The idea is to use the line as support – hold and the trend continues, break and the likelihood we are in for at least a nasty correction increases significantly.

The late January hold of the line cemented the importance of the line with it now having multiple connecting points. It appeared a sturdy line then, but with each successive hold and rally it becomes an increasingly important threshold for traders to watch.

Another pullback or horizontal move into the parabolic line will again offer up the same to the market – an opportunity for BTC/USD to continue to prove its worthiness of such a robust trend.

Going back to the 2015-2018 period, there was another very solid parabolic curve (log-scale), that held on several occasions until it broke in January 2018 and led to a 75% decline. If BTC/USD is following its path from that period, then Bitcoin may have a lot more upside before breaking down. But that is assuming things play out the same. For now, continuing to abide by the curve and taking it one step at a time…

Check out the Q1 USD Forecast 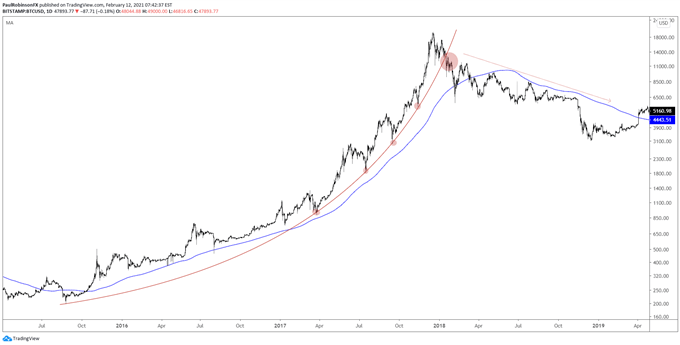 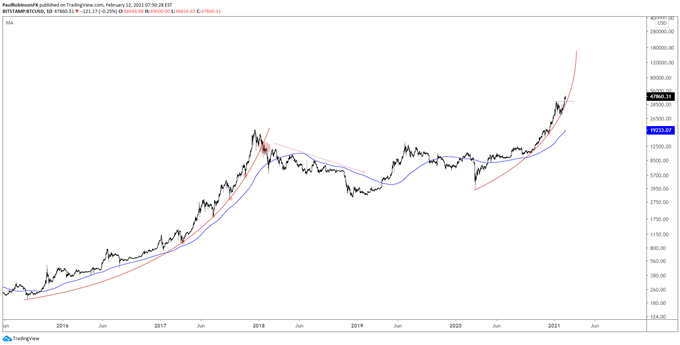 Bitcoin Price and Ethereum Down 5% amid China Lockdown