Technical Forecast for the US Dollar: Bearish

US Dollar Rates Week in Review

The US Dollar (via the DXY Index) posted its second weekly loss of the year, and in the process fell back to the descending trendline from the March and November 2020 highs – the pandemic downtrend. Perhaps more importantly, the DXY Index’s rebound in recent weeks has done little to revert the major technical damage sustained in recent months, remaining below the rising trendline from the April 2011 and February 2018 lows.

Without any bonafide bullish catalysts on the horizon, and two of the components representing 69.5% of the DXY Index, the British Pound and the Euro, appearing poised for further gains, the US Dollar may once again be on its backfoot.

Get Your Free USD Forecast

The third week of February offers a mixed economic calendar, with a more global focus (and less so on the United States, politically or economically, with a federal holiday on Monday, shuttering markets). To wit, there are only three items on the calendar that are worth paying attention to from the US Dollar’s perspective.

On Wednesday, the January US retail sales report will offer insight into consumption trends for the world’s largest economy, which is incidentally the largest component of GDP. Also on Wednesday, the January FOMC meeting minutes will be released, which may underscore the Fed’s commitment to its low interest rate regime. Lastly, on Friday, the February US Markit Manufacturing PMI flash is due.

The DXY Index is barely above the downtrend from the March and November 2020 highs, and the candle on Friday, February 12 warns of more downside. The daily shooting star whose resistance was found at the underside of the uptrend from the intrayearly swing lows suggests that price action is turning more bearish.

Evidence of bearish momentum gathering are starting to accumulate. The DXY Index is now below its daily EMA envelope, which is in bearish sequential order. Daily Slow Stochastics are racing towards oversold territory, while daily MACD is descending towards its signal line. The next swing lower by the DXY Index may be imminent. 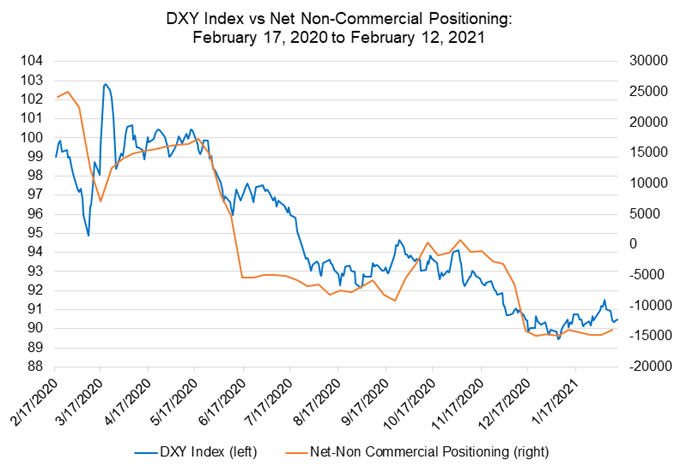 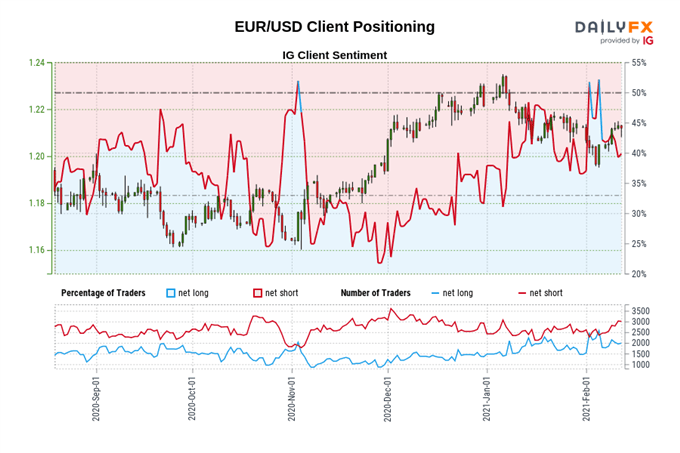 Traders are further net-short than yesterday and last week, and the combination of current sentiment and recent changes gives us a stronger EUR/USD-bullish contrarian trading bias.