The price of gold has been weak for a while, and with it pressing on the long-term support the case for gold to remain soft may soon become stronger. The level in question dates to the topping sequence from the 2011/12 period.

Three peaks were created following the bull market top in 2011 that could continue to play an important role in how things unfold. The level was easily surpassed last year as gold rushed to new record highs, but has shown some importance since then.

In November, the three peaks held as support on a weekly closing basis, which suggests that despite the level previously having no bearing as resistance, it is still important (as support now). With recent sessions amounting to lower prices we are seeing this threshold get pressed again – will it hold?

Right now, the outlook doesn’t look too promising for gold to hold onto the 1764 low, but before passing too much judgement we will need to see if it actually breaks. To consider the level fully breached, given the long-term nature of it, we will want to see a weekly closing candle below.

In the event a weekly close occurs below 1764, look for gold to continue its currently negative trading bias towards the lower parallel of a channel line going back to the summer. The lower line currently resides around 1700, maybe a little higher or lower depending on how (if it does) arrives there.

A breakdown below longer-term support doesn’t turn the outlook completely bearish, though, as the channel from the August high is, in the grand scheme of things, a budding bull-flag. This development later on could be an important piece of a much larger bullish theme.

If we don’t see the longer-term support level broken here, a push higher may be difficult for near-term traders from the long-side as it will be against the prevailing forces over the past few months. However, it will help keep the bull-flag intact from a longer-term perspective.

For now, the short-term momentum trade may soon come to the downside.

Check out the Q1 GOLD Forecast 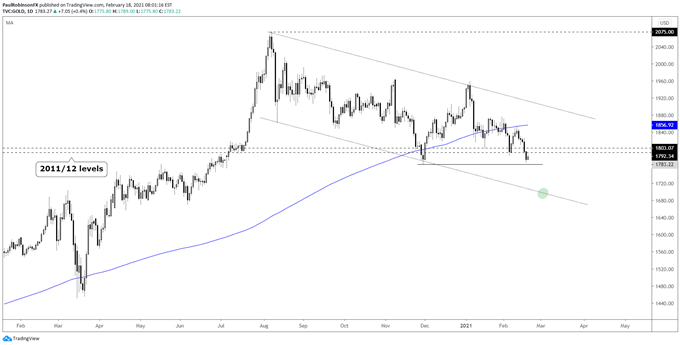